When Creativity and Domesticity Clash, There May Be Brilliance: A Review of Domenico Starnone's novel Trick 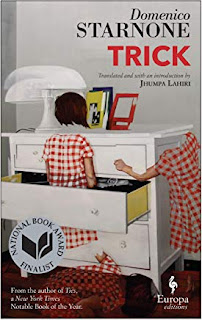 In Domenico Starnone's fourteenth novel Trick, septuagenarian Daniele Mallarico is a renown illustrator in the twilight of his career who must return to his childhood home to care for his grandson Mario, a precocious, goblin-like child who demands his grandfather's attention at all costs. The two battle wits, jockeying to have their needs met--Mario to engage his grandfather in play and Daniele to illustrate Henry James's ghost story "The Jolly Corner." Despite Daniele's league of frustrations in trying to make art happen with a four-year-old in the house, he ultimately produces a brilliant body of work, but not for the James story. What transpires are illustrations of Daniele's own ghosts, of family, his former selves, and to quote James, "all the old baffled foresworn possibilities," different versions of himself he may have become, having grown up in Naples, a city known for its rage ("la raggia").

Daniele admits that he is afraid of being without work, that he is less in demand, that his body is deteriorating; the James story is a chance for him to sustain his productivity and confidence, his life force. But he is thwarted at every turn by the child and by his own limitations:

I had no fun at all. Playing with the child had not only worn me out but depleted energy from the drawings I'd felt the urgency to pin down...Now they sat there like ailing beasts waiting, mutely and blindly, either to heal or die.

He becomes stumped, blocked. He can't envision the New York apartment where Spencer Brydon sees his ghost and he stops trying. He succumbs to what comes easier, to what demands recognition, reckoning:

I still saw my father in flashes, grim, throwing his hair back with both his hands, and my mother, who transformed amid fits of terror and melancholy from a shabby Cinderella to a lady in a veiled hat, and my grandmother, who having suffered a stroke, now sat always silent, arrugnata, a word that, in dialect, meant a body folded in on itself, curved like a billhook left to rust in some corner.

Daniele realizes in the midst of his reflections that he is the lucky one; yes he has always had "various human types lurking in [his] body, some violent, others wretched" but because he had talent, he could conveniently "crush all [his] other spirits and banish them to the farthest reaches of [his] blood." Without his talent, without his work, however, he lies vulnerable to these; they rise up and taunt him just as effectively as the child does.

I found this book to be utterly spot on in portraying the clash of creativity and domesticity; I read it with awe and empathy. Starnone is like Ferrante, immeasurably close to the witness self, precisely articulating each of the protagonist's experiences and the emotion and thoughts that accompany them. Both Starnone and Ferrante (argued to be one in the same or husband and wife) deal in what I call "the brutal truth." There is no pretense in their writing, no decorum, no niceties, no moral trivialities; these writers write from the primal self:

When my father sent me to the foundry he wasn't being wicked, poor man, he was giving both himself and me a lesson in realism. The tradition in my extremely sprawling family tree was to be a mechanic. Or an electrician, like my father. Or a turner like my grandfather...Or [making a] living by my wits, by hustling, by the wiles of necessity, leaving no doubt that I only ever have women on my mind, that I'm never satisfied with any of them, that I collect them, caress them, take advantage of them, beating them when they don't want to bend over nice and quiet...Or to reject the dark chasms of women and slip into male bodies with the excuse of humiliating them, or only because it's easier to feel at home with known actions and reactions, or because the drives are confused, the flesh is uncertain, always moving without resolution from men to women, from women to men, holes here and holes there, so many useless distinctions.

The story culminates with little Mario locking his grandfather out on the balcony in the rain and the cold. The boy literally holds the old man hostage, and as with most hostage cases, release only comes when something is gained. This gain is twofold: the boy succeeds in gaining the grandfather's undivided attention, and the grandfather gains insight and acceptance: he's never going to finish the illustrations for the James story; he can't, it's beyond him, and that's okay. What's more important is that he's pinned down his own ghosts, in a kind of artistic reckoning.


Jhumpa Lahiri (Interpreter of Maladies, Unaccustomed Earth, The Namesake) does an impeccable job in translating the novel from the Italian and her introduction is written with grace and respect. She gives us food for thought on how a translator deliberates over words, the dance of words on the page, the different levels of meaning. The dialogue she captures is so real it seems as if you're hearing it and not reading it. She informs us of Starnone's penchant for James and how the two stories play off one another. Also included in the text is an appendix of real drawings done by the artist Dario Maglionico, which are haunting and surreal, a perfect and justified complement.