What the World Needs Now: Compassion


Pain is physical, suffering is mental.  Suffering is due entirely to clinging or resisting.  It is a sign of our unwillingness to move, to flow with life.  Although all life has pain, a wise life is free of suffering.  A wise person is friendly with the inevitable and does not suffer.  Pain they know but it does not break them.  If they can, they do what is possible to restore balance.  If not, they let things take their course.
-Nisargadatta

I don't know anything about Nisargadatta save what Google tells me, that he is an Indian guru, a spiritual teacher, and a wise man who has sold many books.  But when I came upon this quote, in my bones I knew it to be true.  My father, another wise man, used to say of certain things- illnesses, injuries, emotional phases- "let it run its course".  The saying comforted me because it implied a secret working to life, but I tend to lose faith in this secret working.  This lack of faith has been the portal to dark places, and yet I know I am not alone in going there.  I hear about the insidious effects of depression and its cohort anxiety in the news, in phone calls with family; I read about them in my students' essays, in texts I receive from friends.  One article from Salon online magazine went so far as to call the prevalence of depression/anxiety an epidemic.

According to the U.S. Centers for Disease Control and Prevention, antidepressant use by Americans ages 18-44 has increased nearly 400 percent in the last twenty years.  We can debate all we want if the dehumanizing aspects of technological advances, the troubled economy, and daily stress are the culprits, but the truth is these things are an inherent part of our lives and are not going to go away.  One formidable adversary to this type of mental suffering is often overlooked and discounted; I am speaking here of compassion.  I have been doing research on compassion, listening to TED talks, reading articles, cutting out quotes because I think it is one of the antidotes to this epidemic that afflicts us.

But what exactly is compassion?

What are its attributes?  Do we recognize it when we see it?  Is it a part of our everyday lives?  The first step to knowing compassion is to define it.  According to Dictionary.com, compassion is "a feeling of deep sympathy and sorrow for another who is stricken by misfortune, accompanied by a strong desire to alleviate the suffering."  Often compassion is associated with tenderness: a mother soothing a crying baby (notably, the word for womb in the Hebrew Bible is rehem and this same word is often translated to mean compassion, in general).  Mother Teresa is a prominent figure of compassion for many people; the images of her with the sick and destitute are iconic.  We interpret such behavior as saintly, impossible for the regular person.  Compassion here, seems out of reach; we get a sense that it requires a certain strength and it does.  Mark Meusse, Professor of Religious Studes at Rhodes College, says compassion is "more than just a sentiment" and that it is "born of a brave consciousness and a strong will".  Compassion is often mistaken for pity, but pity keeps its distance from suffering; there is an element of disdain, aversion in it.  Joan Halifax, a Buddhist teacher and Zen priest, says having compassion is "to see clearly into the nature of suffering and stand firm and say, 'I am not separate'".

It's that separateness that causes us to suffer.  It's the diatribe of negativity in our minds, compelled by our success-obsessed society, that enforces our singularity.  True compassion eradicates singularity.

The problem with our culture is that we are selectively compassionate.  We show it when it is convenient for us to do so.  Around the holidays, we give because it is fashionable, because it makes us feel good.  Also, our selective compassion may be a mask for fear.  Barbara Lazear Ascher contemplates this in her essay "On Compassion" when she describes the anecdote of a homeless man being fed by a bakery owner in New York City.  The offering is a backdoor deal; the man accepts the hot coffee and the brown bag and "as silently as he came, is gone".  Ascher speculates why the woman would feed the homeless man: is it an act of compassion?  Pity?  Or is it a preemptive act to remove the man from her shop?  She unearths an ugly truth:

Raw humanity offends our sensibilities.  We want to protect ourselves from an awareness of rags with voices that make no sense and scream forth in inarticulate rage.  We do not wish to be reminded of the tentative state of our own well-being and sanity.  And so the troublesome presence is removed from the awareness of the electorate.

It could be us at the door of the bakery.  It could be us with the gun in our hands shooting at bystanders.  It could be us poking at our veins with a heroine needle.  Even reading these sentences makes us uncomfortable, but as the peace activist and Zen Buddhist monk Thich Nhat Hahn preaches, we are all vulnerable to the dark and the light within each of us and it's up to us which to cultivate.

In the past, compassion has fallen under the umbrella of religion, but today this is not exclusively true.  I have listened to several interviews with doctors citing particular studies on how compassion strengthens the immune system.  Medical practitioners are becoming attuned in Reiki and other hands-on healing arts because touch in the name of compassion helps to heal.  I've been attuned as well and can vouch for the power of human touch.  I was on a skiing trip with the Appalachian Mountain Club and a woman in our group was having stomach pains; she had had surgery and the pain kept recurring.  She asked me if I could use Reiki on her.  It was a snowy night in Vermont and it was dark and cold; a trip to the hospital had to be a last resort.  Although I was somewhat nervous, I wanted to help her.  Also, I was curious to see if this Reiki thing would actually work.  Ultimately the space we cultivated that night- the space of compassion- brought peace.  I laid my hands on her belly as it rose and fell and the pain had ultimately subsided.

But compassion and science is not a novel idea; Einstein, knew full well, that in the hands of the technologically advanced, compassion would be imperative:

A human being is a part of the whole universe, a part limited in time and space.  He experiences himself and his thoughts and feelings as something separated from the rest, a kind of optical delusion of his consciousness- that separation.  This delusion is a kind of prison for us.  Our task is to free ourselves from this prison by exercising compassion and embracing all of nature and her creatures.

Einstein said that science for his generation, the generation that created the atomic bomb, was like a razor blade in the hand of a three year old.  What might be the one thing that prevents a war?  Seeing the "enemy" as human, non-separate, as people like Greg Mortenson do.  By building schools for the region where the Taliban has sunk its claws, Mortenson is choosing compassion over fear.  David Oliver Relin who co-wrote the book Three Cups of Tea with Mortenson says it best: "Mortenson goes to war with the root causes of terror every time he offers a student a chance to receive a balanced education, rather than attend an extremist madrassa."

And yet we must not leave compassion to the Mother Teresas and Greg Mortensons of the world.  Compassion begins on the individual level, with the self.  It begins with the worry we have for ourselves and our lives; it begins with our personal sufferings and darknesses.  To cultivate compassion, we must first define it for ourselves.  We must start with what the mind clings to- images.  We are bombarded with hundreds of useless or disturbing images everyday through media and advertising.  They reel in our minds, even when we turn off the screen.  What if we can replace these images?  What if we can focus on this thing compassion through positive images, images that unify us instead of alienate us, images of the spirit and not the ego; would this be a starting point in cultivating the light that lies within all of us? Will we then begin to know compassion?  And once we know compassion and act on it, thereby deepening our knowledge, will we then recognize an individual like Adam Lanza before the seeds of the dark sprout and take root and tragedies like Newtown take place? 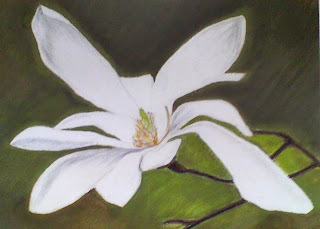 I found this image in a book on meditation.  I used pastels to regenerate it on a larger paper, framed it, and put it in the living room.  This is my image of compassion for several reasons: one, it is white, a color depicting purity and nobility; compassion stems from the purist and noblest parts of ourselves.  Also, it is a magnolia flower, a flower that grows on a tree that blooms only once a year in the spring.  Spring is nature’s compassion for the earth after a hard, bitter winter.  It is a balm, a celebration, a departure from suffering and a leap toward life.  Also, the magnolia tree has been around for about 95 million years.  On the evolutionary timeline, it appeared before bees and is believed that the flowers evolved to encourage pollination by beetles; this is why the carpels (seed producing center) are extremely tough, to sustain the beetles walking all over them.  Compassion involves resiliency as well; a compassionate person must move into the nature of suffering but hold firm.

Unbeknownst to many, there is a compassion movement happening now (I hope to jump on the bandwagon myself, stay tuned for The Compassion Project Call for Submissions post).  I have found curriculums devoted to compassion, A Charter for Compassion, even the Compassion Games.  There is a Huffington Post interview with Jon Ramer, founder of the Compassion Action Network that documents all of these things.  This is all incredibly good news to me, someone who knows full well the power of compassion from seemingly small acts - a stranger opening the door for my oversized stroller - to greater acts - a wise teacher inspiring a long-awaited shift in my belief system.  But I wonder if such a movement will be a prominent and profound one like the Peace Movement of the 1960's or a short-lived, ambiguous one like Occupy Wall Street.  One can only hope we have evolved enough for the former to be true and our children reap the benefits.

Posted by Laurette Folk at 11:14 AM No comments: