How I Define Short, Shorts (Flash Fiction) or How to Make Fodder of Your Dreams 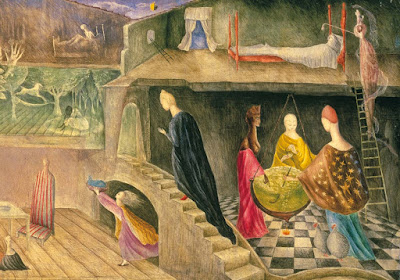 A couple of years ago I gave myself the task of writing from my dreams. I thought I could embark upon the world of flash fiction this way, by using the surreal images and story lines of the unconscious. To do this properly, I used meditation to recall the dream; my life being as it is, it isn't possible to record notes in the morning when I have to get the kids off to school or walk my dog.

Most of the time I sat down to do this, I was immediately convinced that I would produce nothing substantial, that it would be a waste of time, that I really should be doing something else, like looking for a job or cleaning the house. But always, always something materialized on the paper, something obvious and alluring, and I felt satisfied and surprised. I had something to work with.

In a few instances, what I had written was nearly the final draft. This happened with several micro pieces and the story "The Dream of the Moth," which made it into Best Small Fictions 2019 via Waxwing literary magazine. These drafts required minimal manipulation and crafting. Each of these was a gift on a plate; they were waiting for me, and I had to only pay attention to properly receive them. With others, the image from the unconscious was there, as were certain feelings haunting that image, but the story was just a shell and took a consistent amount of arduous crafting, of cutting and adding, cutting and adding, to produce something of merit.

The unconscious is a bouillabaisse of ideas, feelings, and images. Elena Ferrante calls it the Frantumaglia, meaning fragments. I call these up during meditation by listening to a recording of a crystal bowl. The sound of the bowl sets my mind at ease, and when the mind is at ease, it dreams. My writing is a sort of note-taking, but also an interpretation. I do my best to record the essence, the meaning behind the images and emotions. Sometimes I make connections and incorporate past stories or journal entries. I see where the story wants to go.

I have to admit, the flash revision process can be maddening, and at times, completely fruitless. I would like to believe that no story is a failure, that when it reaches the dreadful place of limbo, it is only still evolving. Sometimes it doesn't reach fruition (am I just impatient?), and I have to cannibalize parts of it to fit the needs of another. In the end, this is satisfying as well.

Rejection by a literary magazine is also another way of the piece telling me it isn't finished yet. It's part of the evolutionary process and not a direct insult to my delicate, delicate ego (although I have to keep telling myself this). I go deeper with every rejection, look at my list of criteria for writing flash. I've forced myself to come up with a list and here it is:

1. Something dire; something treacherous. This has all to do with subject matter, either blatant and in your face, or latent and conveyed through images. A famous short short story that comes to mind is Hemingway's "Hills Like White Elephants." (Note: as it is published, "Hills isn't flash because it's more than 1000 words, but it could easily be edited into a flash piece by nixing some of the beginning dialogue and exposition without losing any of its power). It's almost a gimmick the way Jig and the American dance around the dire topic of abortion, but Hemingway's iceberg theory works. Even if you don't know what the euphemism "let the air in" means, you get the sense by Jig's hesitation and the American's persistence that something serious is going on.

2. Image. This is where tapping into the subconscious is so fruitful: it is a bounty of images. If an image is prominent enough and perfectly placed, the story will revolve around it. The mind will pick it up like a glittering shell in the sand. In "Hills" the symbolism of the white elephant, rare and pure, nails Jig's latent desire to have a child and live a more respectable life.

3. Yearning. According to Robert Olen Butler in "A Short, Short Theory" from the Rose Metal Press Field Guide to Writing Flash Fiction, fiction must include a character that yearns. Plot is the thwarting of that yearning. Again "Hills Like White Elephants" comes to mind because Jig's yearning to have a child is thwarted by the American's selfishness and desire to live a non-committal life. That yearning turns sour and makes Jig a petulant, sarcastic child. The fact that emotion morphs has all to do with

4. Emotional Complexity. Characters need to be round in flash and this is what's difficult because you have to construct the character's complexity in as few words as possible.

5. Vivid, compact, efficient language is absolutely paramount in flash. Jennifer Pieroni gets it right in "Smart Surprise in Flash Fiction" from the Field Guide: "Excellent flash fiction displays a true mastery of language...As in a sonnet, every word in every line matters in the mathematical sense." Unnecessary wordiness will kill a flash fiction piece. A great example of a paired down flash piece is "Snapshot, Harvey Cedars: 1948" by Paul Lisicky, anthologized in Flash Fiction.

6. Surrealism, magical realism. This might not be on everyone's How to Write Flash Fiction list; some people are diehard realists, but I love the surreal, because it's fresh and transcends the cliche of rationale. It's the language of the underworld, the id and the myth, the stuff of dreams, the refreshing exposé of primal inclinations as in Shabnam Nadiya's "Eating Bone" and Rubem Fonseca's "Night Drive" from Flash Fiction International. I want to make my flash pieces like Leonora Carrington's paintings (see above). I want dead people moving in and out of my stories. I love wacky images like Francois Camoin's "father [as] a small blue pyramid with a single brown eye, like the picture on the dollar-bill" in "Things I Did to Make It Possible." I love the falling girl in Dino Buzzati's "The Falling Girl," how she lives her entire life in one delicious descent, and Barry Yourgrau's "By the Creek," anthologized in Sudden Fiction International, in which a group of boys convene in the woods wearing their fathers' heads.

7. Flow/Layering/Density/Depth. This has all to do with language, but also integration of layers of time. You can make a flash piece a moment, a vignette, or you can span a lifetime, so long as you do it efficiently. This means only including what's electrifying, skipping the minutiae, and foregoing the nagging need for exposition (hard for traditionalist fiction writers to do, easy for poets). See "Snapshot, Harvey Cedars: 1948."

8. Epiphany, irony, surprise, and/or illumination. Epiphany is the yearning realized, accepted, and a gain of knowledge; to quote Butler quoting Joyce, it is "a moment at the end where something about the human condition shines forth in its essence." In David Brooks' "Blue," Butler's definition of yearning is satisfied because it is the yearning that is exposed. Kate Chopin's short, short "The Story of an Hour" hits the entire list. Louise Mallard sits in her room after hearing of her husband's death and resonates with the spring outside her window; she realizes that she is "Free, free, free!" because "she saw beyond that bitter moment a long procession of years to come that would belong to her absolutely." Just after this epiphany, Brently Mallard shockingly arrives home safe and sound and Louise dies of what the doctors declare "joy that kills," but we, the readers, know better. Boom, boom, boom, Epiphany, surprise, and irony: just when she gets to live life as she sees fit, she dies.

10. Field Guide to Writing Flash Fiction. This how-to book edited by Tara Masih contains enlightening essays on the craft and sample stories. It's a must-read if you want to indulge in what Stuart Dybek calls "slipping between the seams."