Titans Looming, a.k.a Poets on Panic 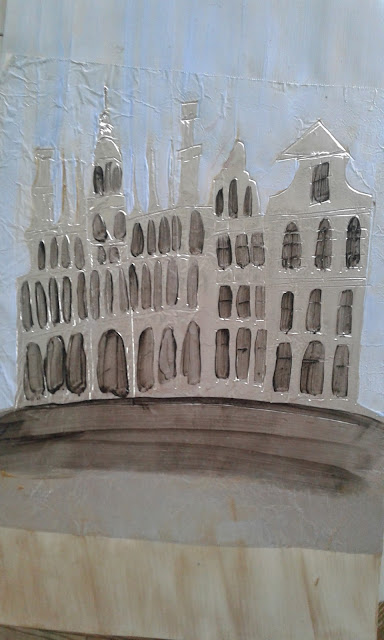 What I have come to observe is that the energy of the mind can propel you places. That bundle of energy in the mind can be equated to that of a compressed spring. Case in point: I went to bed one night last week pretty stressed out; my body being tired fell easily to sleep and it took the conscious mind with it. But somewhere between the waking world and the sleeping world, the spring was released. The psychic energy stored from the stress of my waking life jettisoned me headlong into a place I can only describe as Hell.

I was in this place for what seemed like five seconds, but it was quite clear that this was a dark place. I don't know how else to describe it. There is that saying about how when you feel so distraught, you want to jump out of your own skin. This feeling is more that there is someone sinister pulling back your skin, exposing every vulnerable organ.

I awoke in a state of pure panic. My arms were in the air, I was reaching for something. I may have even yelped. I recall the images that were present and I later wrote these verses:

An iron filigree fell
from the sky, scorched
I paid wooden nickles
for the boat

This seems to have a Charon reference, but I can tell you that this place was not Hades; this wasn't a place where shades wandered around bemoaning their fates and the mistakes they made in their lives. This was a place where some sinister being wanted nothing better than to excoriate anyone who came into its domain. Where in my unconscious mind could I be keeping such a creature?

So I did some research about the just-before-you-fall-asleep panic attack and it is fairly common. People say they feel as if they are sinking or dying and they jolt awake. Scientists, doctors rule out any danger and attribute it purely to anxiety, which, in itself is harmless: you just need to dispel the spring and there are countless techniques to do this. No one, however, said anything about meeting the devil.

So this got me thinking about the nature of panic. What I have learned is that there is conscious panic and there is archetypal unconscious panic. I can tell you that the archetypal panic packs more of a punch probably because it deals with the vat of those buried fears and desires we call the unconscious mind.

Last spring I was having dinner in the North End with a friend when I started to feel some pretty intense anxiety that I had not felt in a long time. I had been observing the party next to us, how they reminded me of my grandparents and their siblings. Their mannerisms and conversation relayed an ease of being with one another, typical of people who have shared a certain history. The proprietor knew them; they had gathered often to share a meal with one another. They raised their glasses over their heads for a toast and this affected me, got me thinking about the past and the dead. There was one man in particular who pivoted himself toward our table looking for conversation with us. He reminded me of my grandfather from the suit jacket he wore to the tint in his glasses. He talked about the Bocelli song playing, how it was beautiful. He even said the word like my grandfather, beeuuuteeful. The man, in his neither-here-nor-there position triggered something in me. It would soon come barreling down the tracks and hit me full on.

Perhaps it was too crowded or the tables too close. Perhaps I was overstimulated by the social aspect of the evening, by the readings before dinner in a tiny bookstore where I felt trapped. Perhaps my claustrophobia was triggered, but then squelched, thereby compressing the spring. Perhaps it was the social stimuli, the over-smiling, the niceties one experiences when one wants to make a good impression. Perhaps it was the presence of the dead. It suddenly occurred to me that I could not catch my breath. And there it was, that queer space of panic where you recognize nothing familiar, not even your friend. I stumbled into the night, the darkness, and the buildings were like titans, looming.

This is the landscape of panic, this is the foundation: alienation, and with no allies, no comfort zone, nothing to steady you, you fall through space until time passes, chemicals shift, you finally catch your breath and register something familiar, your keys, the feel of the steering wheel, your husband's voice on the phone, and the concept of Here, You Are Here Now returns.

Both convey the idea of death. Yours.

When I lived in my house on Fayette Street, just before I was married, I experienced one of these archetypal unconscious-but-not-too-unconscious panic attacks. I remember that I had drank a full glass of orange juice before going to bed. (I attributed it to the sugar rush). I fell asleep and was suddenly transported through a portal to an in-between place where I felt the presence of a middle-aged man and woman. I was with them in this unworldly place where they were perfectly at home and I was not. It was just a blip and then I was instantly propelled from sleeping to standing in my doorway, my heart in my throat, fully conscious that I had been with two ghosts. Now that I was awake, they weren't there; It felt like they were a million miles away. I recalled then how a psychic once told me that two spirits were living in my house; they were friendly and they bid me no harm. Was it these two spirits I sensed? I remember quite clearly how the thought process went when I registered them: otherworldly, terror, flee, now. I don't even know if they were truly sinister or not because my brain couldn't relax enough to get the correct information. It sensed this supernatural/archetypal place and then the fear propelled me back to consciousness.

When my daughter was three, she had night terrors. About an hour or two after she fell asleep, she would start screaming and thrashing in her bed. Clearly she was not sleeping and she didn't seem to be awake either. She seemed absolutely tortured and there was nothing I could do about it because she was in that other dimension. The doctor told us it was because her nervous system was developing faster than her brain could handle, or something like that. We were told to not touch her, not to restrain her (although sometimes we tried), to just let it pass, which took about twenty minutes. But the look on her face--it was pure terror. It was the same terror I experienced.

Because the unconscious mind works in images and archetypes, it is more powerful. This is why poetry is powerful: the two come from the same place and reach us profoundly; they reach us in ways that the conscious thinking mind can't.

I am not particularly sure why I have a sinister presence lurking in my unconscious. I suppose I can always blame it on my Catholic upbringing (if you read A Portal to Vibrancy, this is quite clear). I do know this, that my friend back at the North End restaurant that night knew exactly what I was experiencing, despite my not seeing an ally in her at the time. She had written a poem about the experience (You can read it here). Her use of certain archetypes, allusions, and images made me feel like she was literally peering into my head. I couldn't see it at the time, her sympathies because I was walled off by my own fear. And this is a good argument for how fear alienates us and keeps us from communing with the people we most need.

Here's my poem on panic, a work in progress. Notice the similar themes between the two poems? What's surprising is that we had written these poems unbeknownst to one another. We had both sensed that the experience was good fodder for a poem.

It started at the table
this sudden discord

this sudden horde of heat
my blood-red  heart beat wild.

An older gentleman, delighted with the song
praised the blind man’s singing

His face, my grandfather’s face,
His hands--

Next to us, a stranger swirls wine and laughs
and the water flows into my cup,

as they raised their glasses
while the envious past walked the carpeted floor,

and we paid the check and went out into the night.

I pushed through this hole in the evening,
regarded the buildings—titans looming.

My friend, dressed in black,
sitting on a bench inside the tunnel

her sympathetic eyes, her old-world face,

her abandoned cigarettes, her resilient poems—
glanced at me as if through glass.

I went to the tracks, saw the walls curve
into pitch, leaned over

looking for that moving light.

Posted by Laurette Folk at 6:56 PM No comments: