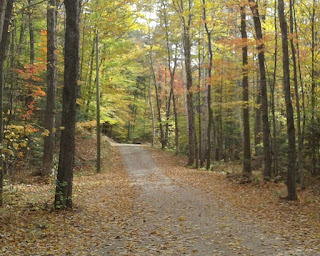 There's something about that copse of pines in Sally Milligan park that soothes me. I went walking there amidst those tall, solemn pines and the land that slopes gently to and fro, along paths that bypass outcroppings of rock adorned with moss and ferns. I made a deal with myself to go there on the weekends as a means of doing away with the collected stress of the week. There, in those woods, I can transcend my stress.

I have been thinking a lot about transcendence, that concept of moving past something--a mood, a problem, an illness, a life. The Transcendentalists of Emerson's time embraced the natural world to purge themselves of the existential angst and minutiae of civil life, and I understand that now more than I ever did. What I have realized, however, is there's different types of transcendence.

One of the most profound types is the transcendence of sickness, be it mental or physical. With any illness, there is always an expectation of the healing, but amidst that, a profound doubt. I remember when I contracted poison ivy one spring; the itching and oozing was phenomenal. In the midst of my suffering there was that buried thought; what if this doesn't heal? It's illogical; of course a case, any case of poison ivy is treatable. And yet when suffering is intense, we can't help but entertain irrational thoughts. I've entertained these irrational thoughts when I had bad cases of the flu and periods of depression. What if it doesn't end? What if I don't heal?

What is most important during these times of suffering and illness is patience and compassion. When I was clinically depressed, it was the compassion of my meditation teacher that really impressed me. I felt supported, less alone. And when I started to heal in each of these instances, I marveled at the healing, the healing of skin, of mind, of body.

I can only imagine how cancer survivors feel. Do they feel empowered and infallible? Or are they tortured by the possibility of recurrence? Many people suffer the loss of body parts and have to make peace with the mirror, with the fact that their bodies have been permanently altered. I imagine with that, they feel anything but powerful. I think back to my father, who, in his day was built like a Roman god. He had a colostomy at fifty-two due to colon cancer and that bag attached to his body was a constant reminder of his mortality. I think he felt both tortured and blessed by it. Ultimately my father transcended cancer by transcending his life. He retired his earthly form for something else, something entirely our of my reach of understanding. Is he the sunlight, the owl in the wood, a comforting thought? I can only speculate.

Grappling with a problem and finding the solution through effort, intuition, and wisdom is another type of transcendence. I think of Frederick Douglass's journey to literacy and African Americans transcending slavery, all the wonderful works of art and literature as proof of their passage. Frederick Douglass, Alice Walker, Toni Morrison, Duke Ellington, Langston Hughes, Richard Wright, and Barrack Obama were beacons lighting the way for their collective transcendence.


I wrote the poem below after learning about Christopher Roybal, one of the victims of the Las Vegas shooting. He was a veteran and the irony of his surviving war, dodging his fair share of bullets, only to be killed by one at home was not lost on me. His last Facebook post, written sometime in the summer, addressed the question, What does it feel like to be shot at? I too have wondered what it feels like to be shot at. The well-written post satisfied my curiosity. From what I gathered, it's a piece of hell that lives inside you. What I realized by writing this poem is yet another type of transcendence, the transcendence of the brave, those who live with the constant state of danger for the greater good. In succumbing to the bullet that haunted him, Roybal achieved a special kind of transcendence, one that is nearly Christlike.

Transcendence, in all its variations, is evidence there is a path for the soul. The end state need not be intelligible to us now; the mile markers along the course should be proof enough.

They’ve identified one of the victims
a man, a veteran who made it home
from Afghanistan only to be killed
from the  sniper perched on high
in a luxury hotel in Las Vegas.

I have never been to Las Vegas,
the casino city that mars the desert
doesn’t appeal to me, but I do know fear,
as if there’s a gunman perched in my head
and it’s only a matter of time
before he gets me.

But this isn’t real.

Thousands of miles in either direction,
they are sifting through the soldier’s words,
reading his name, telling the story of how
he was looking for a wild west in the east, a real
gun fight, an adrenaline rush.

Here, I drive to work
in a long line of traffic and
the marsh grasses are turning gold
above the low tide mud flats.

What’s it like to be shot at? We want to know,

we the civilians, the teachers, the waitresses, the lawyers,
the doctors, and all the other Christopher Roybals—

we with our dull lives of angst and failure
and what love we can rummage together.

We know nothing of the pinging of metal, the mass
confusion, the mania, the pop, pop, pop, and the rage—
the nightmare no amount of drugs,
no amount of therapy can cure.

It is morning
and the tide inconspicuously covers the banks
and the blue sky of October looks almost like forgiveness,
and there’s a feeling that the Earth is almost content,

but
still there is this question:

What does it mean to succumb to the bullet
that haunts you?
Is there a soul’s peace there?
A god?

I wonder, though, if they really looked
at the photo where your face is
illuminated and your eyes are bright
and there is the telling evidence of

of what only the brave know.
Posted by Laurette Folk at 10:24 AM No comments: