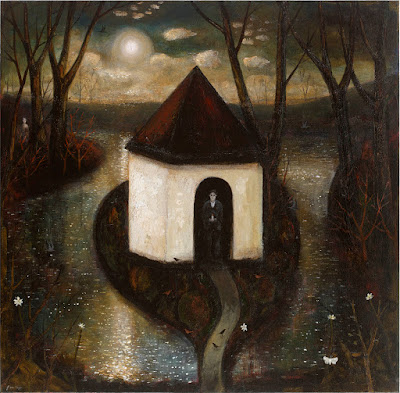 I discovered a skull blanched white, turning to stone, smooth with only a few back teeth present. The holes for the missing teeth were delicate crevasses I could peruse with my finger. The skull may have belonged to a skunk; it had a narrow nose, and was the right size. I stuck it between the tripod trunks of a large oak.

I discovered a gray world hovering over the river. I looked deeply into the grayness and felt I could disappear there. It was melancholy but peaceful, a serene oblivion, one we all fear, but shouldn't.

This morning it was bitter cold and the leaves hung lifeless on the trees. They had forgotten to drop, or were just about to, but froze. They are now stuck, and I wonder if they will be hanging lifeless all winter, be covered in snow, form haunting shapes at night. Nature's confusion. I find this obstinate green disturbing.

We walked around the block and the shade was nearly unbearable; we walked and tried to reclaim the sun, but couldn't. I instead found a mask with black shimmering sparkles on bone white. It made me think of Venice, a city of lace and other well-made things, a city, perhaps of "spiral staircases encrusted with spiral seashells, where perfect telescopes and violins are made" to quote Calvino. A city that presents a tourist face during the day, and yet, as a tourist, you sense there is something beyond this. The masks hanging in the shop windows indicate another Venice, a Venice that arrives only at dusk and leaves at dawn; a Venice of primal urges disguised in elegance, of intrigue, deceit, play, the antithesis to the banality of daily living.

I discovered a city across the river with a bell tower and a historic brick factory. It is my city, and it should be familiar, but from this perspective, it's not. It is a far away place, a northern city with exclusive artifacts I may find interesting.

Three days ago, I discovered a painting. In it, a poet stands in the portal to a cottage where the dark mystery of November and the gray pathways of a river surround him. The poet is like a ghost who haunts himself and instead of seeming dreary and morose like November can often be, it is elegant and ethereal, like a masked Venice at dawn. To its onlookers, it presents a certain mysticism worthy of exploring, if they would only stop complaining about how miserable November is.

Today on the trail, I discovered a fox. She ran out from underneath the bushes by the bridge and surprised me. She stopped when she was a good distance away, about 100 feet or so, and turned to regard us with curiosity. I talked to her in a soft voice, tried to ease her worries. She was diminutive, had delicate limbs, and that typical bushy tail. My dog sniffed the air; the hair on her back went stiff. The fox didn't move and we didn't move. The marsh grasses around the bridge were still as well, when typically they whisper and rustle. Then I crossed the bridge to the river banks where the river was between tides. The sun came out and I felt as if the sun were a god, acknowledging me, finally. I bowed my head, as if given a blessing.
Posted by Laurette Folk at 8:24 AM No comments: