Jesus, Debunked (Sort of): A Review of Reza Aslan's Zealot 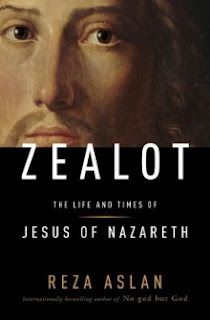 My daughter and I were sitting in Panera the other day when I found myself eavesdropping on a conversation at the next table. Here was a group of elderly people, three women and two men, and the men were eating their bagels and drinking their coffees while the women chatted away. The two men seemed to be deep in their own thoughts, looking away from one another, until one of them said, "A funny thing happened to us while we were at the park the other day," or something to that effect. The gentleman then proceeded to tell his friend quite casually how he and his wife saw Jesus's face in the bark of a tree. The wife noticed it first, and then she pointed it out to her husband. "Do you see it? There, there..." and sure enough he saw it, and they both sat there marveling at the famous face for a while. He went on to say that his wife went back the next day to see it, but the face was not there. No matter how hard she tried, she couldn't see it. Then the older gentleman, who seemed to me a reasonable and rational man, one that had seen many things in his day and one who was not easily excitable, sat back, and without any facial expression whatsoever, said, "Imagine that, two Jews see Jesus's face in a tree."

I have recently had my own run in with Jesus--the historical Jesus--upon reading Reza Aslan's book Zealot.

I found Aslan's argument fascinating, acutely documented, and very plausible. It confirmed my own beliefs of how the world works and how with every heroic figure, there is a very human agenda. Jesus's agenda, according to Aslan, was to free the Jews from the Romans. The occupied state was everything to Jesus and made him who he was.

One of Aslan's main claims is that the gospels, written decades after Jesus's death, were embellishment, but embellishment with a specific purpose, and Aslan carefully lays out the reasons for this embellishment every step of the way.


Aslan constructs his argument on the claim that the gospels "are not eyewitness accounts." Obviously this is the case because of the time the gospels were written. The gospels instead are "testimonies of faith" and in this way "tell us about Jesus the Christ, not Jesus the man," i.e. the spiritual figure--the myth.

First of all, it must be said that the people of the ancient world "did not make a sharp distinction between myth and reality; the two were intimately tied together...[t]hey were less interested in what actually happened than in what it meant." So this "embellishment" had a purpose and that purpose was to connect with the Christian mythology that was needed at the time. And when I say myth, I do not mean "lie," as is often interpreted. (See Joseph Campbell's The Power of Myth for a more thorough explanation). Myths are archetypal stories to instruct us on how to live; they deal with unconscious desires of the body and mind, rites of passages, ways to define mystery, and social ethics. Ancient societies were tied to myths because they had less distractions: they were intimately connected to the world of the subconscious (dreams) where myths arise.

But Jesus the man, the Son of Man (a very interesting and enigmatic term), the zealot revolutionary, was a remarkable figure in himself.

Aslan begins making his case by giving us the lay of the land and what was happening at the time, the key figures in the occupied society and its social mores. Jesus wasn't the only one claiming to be the messiah of the Jews; the place was crawling with men claiming to be messiahs including "Hezekiah the bandit chief, Simon of Peraea, Athronges the shepherd boy, and Judas the Galilean."(Note the term "bandit" does not mean thief but zealous itinerant rebel who resisted the Roman occupation).

This begs the question, What makes Jesus different? Why was he the pillar on which a worldwide religion was built? The answer lies in one event: Jesus's trashing of the Jewish temple and the philosophy behind it.

Aslan painstakingly describes the elements of the Temple in Jerusalem in the chapter "A Different Sort of Sacrifice." The Temple was the one and only place for Jews to honor God by the ritual of sacrifice, i.e. the shedding of blood. This was the sacred place where the high priests slaughtered animals to wipe away the sins of the Jews; the shedding of blood was believed to be a sort of purification process. These animal sacrifices were not unlike the ones you read about in the Iliad and the Odyssey; it was a thing for ancient people. It was a way to make things right with the gods.

The sacrificial animals were sold right there in the Temple. Money changers exchanged "foul foreign coins for the Hebrew shekel," collected tax, and even issued credit. So this holiest of holy places was also a place of business, and that really pissed off Jesus, so much so that he did the unspeakable: he trashed it. And with this came the crucifixion and Jesus's fame: "Above all, this singular event explains why a simple peasant from the low hills of Galilee was seen as such a threat to the established system that he was hunted down, arrested, tortured, and executed."

I found myself constantly underlining text, starring it, rereading it, writing myself notes to process it. Aslan's argument is so informed, so complete, it can't help but ring true as to why Jesus rose to fame. Moreover, you get a sense that Aslan needs to define who Jesus was for himself; as a former born again Christian who studied history of world religions in college, he walked the path of faith, then doubt, then reverence:

I continued my academic work in religious studies, delving back into the Bible not as an unquestioning believer but as an inquisitive scholar. No longer chained to the assumption that the stories I read were literally true, I became aware of a more meaningful truth in the text, a truth intentionally detached from the exigencies of history. Ironically, the more I learned about the life of the historical Jesus, the turbulent world in which he lived, and the brutality of the Roman occupation that he defied, the more I was drawn to him.

Aslan's argument also focuses on the duplicity of the high priests and their favor with Rome, the brutality of Pilot (not the innocuous figure who sides with Jesus in the gospels), the role of John the Baptist, the role of James, Jesus's brother (dismissed by the Roman Catholic Church to keep Mary's virginity intact), the role of Saul/Paul, and the Roman intellectual elite for whom the evangelists (gospel writers) rewrote the story of the crucifixion, holding culpable not Rome, but the Jews themselves:

A generation after Jesus's crucifixion, his non-Jewish followers outnumbered and overshadowed the Jewish ones. By the end of the first century, when the bulk of the gospels were being written, Rome--in particular the Roman intellectual elite--had become the primary target of Christian evangelism. Reaching out to this particular audience required a bit of creativity on the part of the evangelists...the Romans had to be completely absolved of any responsibility for Jesus's death. It was the Jews who killed the messiah. The Romans were unwitting pawns of the high priest Caiaphas, who desperately wanted to murder Jesus but who did not have the legal means to do so.

So the evangelists adapted the myth to the times and people who were willing to practice the faith. One could say that the faith "evolved." One can also say this with respect to the Resurrection: it was a part of the "evolution" of the faith. This event in itself is the reason a "failed messiah who died a shameful death as a state criminal [was] transformed, in the span of a few years into the creator of the heavens and the earth: God incarnate."

How exactly did this happen? Aslan argues that the apostles themselves were ill-equipped to deliver Jesus's message and could not "theologically expound on the new faith or compose instructive narratives"; they were illiterate lay people. It took a diaspora of "educated, urbanized, Greek-speaking Jews" who would deliver the message of Jesus to both Jews and gentiles. These people, steeped in "Greek philosophy" and "Hellenistic thought" are responsible for transforming Jesus from revolutionary zealot to "celestial being."

That was hard thing to wrap my head (or is it heart?) around; the idea that the Resurrection was fabricated to prove that Jesus was not a failed messiah. The Resurrection means a lot to me, as it does every Christian; it's the link between this world and the next. It gives us all hope that we do not simply end with the body.

And why wouldn't it? After all, mythology is a set of archetypes to show us the natural progression of things. Myths don't have to happen as factual history to be something to believe in. A novel can have all the elements of human truth but not be factual with respect to history. Moreover, the fact that the Resurrection was juxtaposed in the spring with the pagan celebration of Eastre, the goddess of spring and fertility, is key. The two events resonate with each other and are further proof that myth, which translates across religions, which is steeped in story and metaphor, is a universal message connected to the spiritual realm, to ritual, and something we must live our lives by to give them meaning.

Despite all this debunking--separating the mythical Christ from the historical Christ-- I still feel the need to for a sanctuary on Sundays where there is a lesson on how to be good, where there is soulful singing, where you can shake hands with people and wish them peace. Christ, despite being a revolutionary zealot, was a compassionate man who championed humility, who cared for the poor, who embodied the Golden Rule. I don't think Aslan would dispute this. And Christ, the myth, the spiritual being, has his own way of showing up in people's lives, and this is not exclusive to dogma. He manifests in the love we express for one another, in forgiveness, compassion, or just maybe in the bark of a tree.

Note: Another aspect of the mythical Christ is his miracles, raising the dead, healing the sick, etc. Aslan says there is simply no way for us to know whether these supernatural events actually happened as fact and are part of the historical Christ; what we do need to recognize is that Jesus's followers (and enemies) were wholly convinced of them. This, of course, was recorded in the gospels.


Posted by Laurette Folk at 6:16 PM No comments: