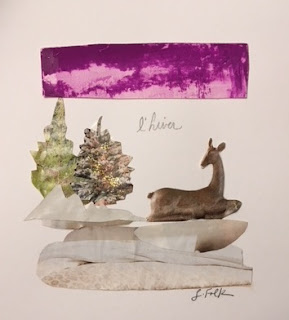 Early Christmas Eve morning, there was a bone-white moon in a pale pink sky. I had seen its face--a circle of ghastly white--suspended in the embroidered web of the tree of life, a curtain I have had hanging in my living room for ten years or more. It was a full moon, a placid moon, a Christmas moon. The previous night, it was a comfort, as it has so often been, while I lie with one eye awake on the couch, watching Josie, who lay in her bed on the floor, a bandage over the gash she opened a week ago. She was fidgety, and I was worried she would get into it again, nibble at the sutures the doctor sewed into her after he took out the tumors. Part of the incision has healed fine, but the part she had gotten to bloomed into a fleshy pink rose with  an opalescent white center, a tendon, perhaps, in the middle of it. I couldn't look at it at first, but life has a way of making things mandatory. So now I am a professional dresser of wounds. 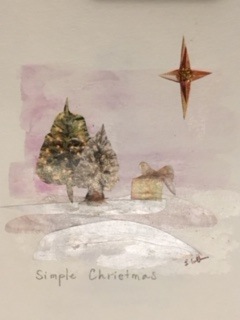 This entry is supposed to be about Christmas, the concept of Christmas, or rather, what I have long discovered, how Christmas can never live up to what we expect from it. This is the mistake we make in our society. The "stuff and story" part of Christmas renders it a child's holiday, toys, Santa, elves, etc., but even children feel the insatiability of Christmas, of materialism, always looking for one more present to open. (I can acutely remember the hollow feeling of Christmases past and opening that last gift, myself). Adults over drink and over eat. We over decorate, over buy. This all feels so stupid and I keep asking myself why do we keep doing this?

If you look south when you drive over the Bridge Street bridge, crossing the Bass River at night, you'll see a small tree out on a pier, lit up with lights. It's just a a simple pine tree, maybe four feet tall. It doesn't have a thousand fancy ornaments, and there are no presents beneath it. I look at that tree, and it gives me such joy to see it. It's as if someone is saying, I know there is darkness everywhere; it is the time for darkness, but there is light, there is festive light, if you take care. 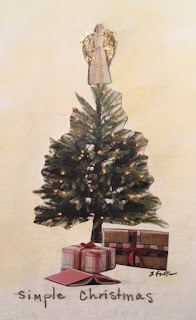 Hearing a choir sing Silent Night also gives me joy, as does the moon on an anxious night, and a star, a prominent star, something to follow, to reflect upon, early Christmas morning. Josie had fallen into a deep sleep, and I thought I could go up to my bed, top off the night with quality rest, and I turned to look out the stairway window and I saw it. It was the brightest star I had ever seen, and I waited for it to move because it just had to be a plane, and I blinked, and still it did not move. It was a star. It was the Christmas star. There wasn't a congregation of angels dancing around it. It was just a simple star, but it was the brightest star I had ever seen.

If maybe we start to expect less of Christmas, we will have a better chance of being fulfilled. If we turn to nature, as the Wise Men did, we might find our gifts there. The collages that I have created here are my attempts to find a simpler Christmas, one more soulful and satisfying. 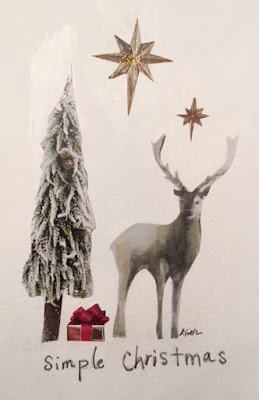 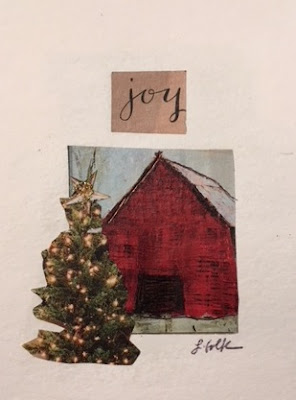 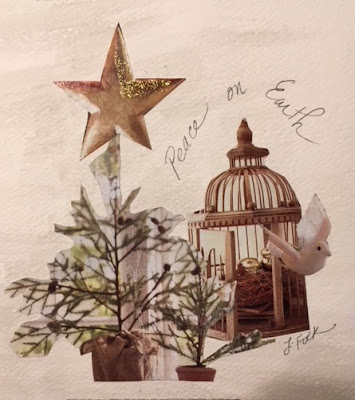 Posted by Laurette Folk at 4:59 PM No comments: