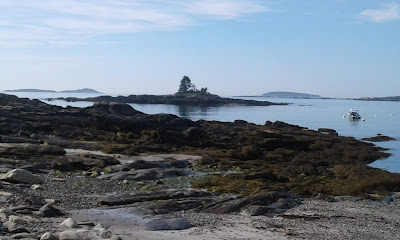 It's early July in Maine and the beach roses are still in bloom, as are the irises. We're staying where we stayed last year at the Ocean Point Inn in East Boothbay, a charming old inn that was built in the nineteenth century and was once a farm house. Our unit is an efficiency with a deck that looks out at the bay where boats are docked and rock gently with the lapping waves. Across the water is what appears to be an island with rocky shores and rugged firs. There's a house there, a grandiose house and whoever owns it must own the island as well. That's what people up here do: they own islands. We saw one for sale when we were kayaking. 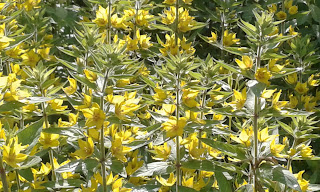 Last night I watched the sun set over the water and an osprey halted itself in mid-air then dove for a fish. I was awestruck at its acrobatics, how it could reverse direction so efficiently, be so precise. It snatched that fish decisively and was back up in the air in less than a second. And then its mate came from somewhere else and the two flew home over the firs. We humans have to think, plan, execute, but animals can simply execute. They run on instinct, a code in the brain.

This place reminds me of the essay by E.B. White titled "Once More to the Lake." White talks about the new flywheel motors and the third track missing; I don't get a sense of the passage of time here, more that time is slower and involves less. You would think I would be okay with that. I want to be okay with it, but the truth is there is this undercurrent of unease rippling inside me, as if all those things time is normally stocked with are rumbling underneath my skin, and I can't let myself truly be present.

The lobster boat chuffs now into the bay there are far away voices. The water is relatively still. It's a quiet sight. A dog roams the rocks on the island, a trap is dropped and the boat makes a turn and stops. I think to myself, why am I not enjoying this? What tears at me? 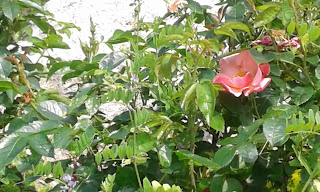 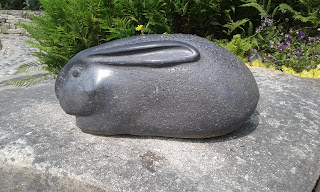 There are tiny bees here that reap the nectar of the antique roses, and I found two mating on my arm. Delicate but steadfast creatures, I had to wait a while before the wind took them away. At night, frogs chirp and croak in the lily pond between the buildings and the lotus flowers peek up from the muck like the soothing thoughts of a bodhisattva. Mary walks the sea wall with tiny daises in her hair and Stephen can recite the totem animals of Maine. When he put on a Polo shirt with miniature sharks on it, I could see the handsome man he's destined to become. And I am half here, because a part of me drifts a few feet above my head in a limbo space, where I am wishing and waiting for a time to create and process the gifts of this place. But that never really comes. Despite the separation from my daily routine, there are responsibilities here, things to do as a family. Even here there are things that must be done. 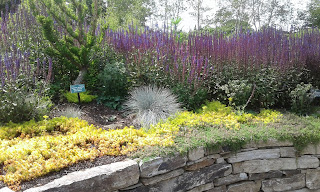 I debate with myself what I should do in the brief time I have to myself. I could swim in the ocean, but the rocks would cut my feet. The cold water will numb my limbs. The sun burns my skin if I don't use sunscreen and the mosquitoes will devour me if I walk in the woods. This is a treacherous environment despite its beauty and you must be prepared, but I never am.

My husband tries to be prepared at all costs. He spent hours packing the day before the trip and then again just before we left. He gets anxious that he will miss something, the car has to be packed just so, and he often snaps at me and the kids before we leave for one reason or another. His neuroses usually pays off, though, because we have everything or almost everything we need. He packed food, clothes, toiletries, drugs, vitamins, drinks, books, electronic devices and their chargers. (We had to buy salt and paper towels). I am one who believes in spontaneity and being resourceful; he can't tolerate poor planning. He thinks my lack of planning and packing is childish. Reckless. I think I have more faith in life than he does. I am willing to put myself out there, rely on instincts, wit, or at least this is what I tell myself. 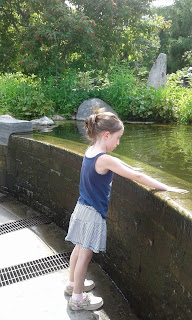 The homes on Ocean Point are well kept; some are refurbished cottages, others are hidden mansions accessed only by a private road or trekking up the granite coast. It's a precarious hike, you've got to be careful of your footing, and the question in my mind is what must one do to acquire, build one of these museum-like habitations? And I use the word habitations loosely, because it doesn't appear as if anyone is in them. It's wild on this nook of the coast; all you can hear are gulls and waves and you get a sense of the treacherous solitude of Maine. What must one do? Further down the coastal scenic road and I have a full sense of Have and Have Not. There are "PRIVATE" and "NO TRESPASSING" signs everywhere. I can't help but feel rejected when I see four inviting Adirondack chairs facing the sea and a red and black "PRIVATE" sign.


We went kayaking on the Damariscotta River and it felt right to exert some energy to be fully indulged in the landscape. It cleared my head. In the evenings, we perused the Boothbay Harbor shops, had dinner and ice cream. Mornings, we had a full breakfast at the Inn and were served by hospitable people who spend their summers working at the inn and then live somewhere else during the winter. They were seasonal people, and I wondered about their lives, if they were always working, working, the maids in their beautiful Jamaican braids and their carts full of cleaning items, cleaning the toilet bowls and the rugs and the sinks, making the beds, finding who-knows-what the guests have left behind. What was this place to them? 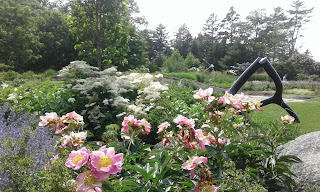 The last day, we visited the Botanical Gardens (the pictures I have posted are from there). Here people have learned the secrets of the treacherous landscape and have harnessed it to put forth blooms. I finally feel at ease and delight in all the burgeoning flora; it's like the Garden of Eden, and I feel welcome here. A cultured space like this belongs to everyone and no one at the same time.