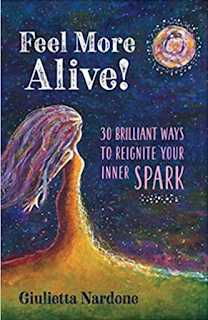 I started reading Giulietta Nardone's book Feel More Alive! 30 Brilliant Ways to Reignite Your Inner Spark this past October because I needed something inspirational. Having been unemployed since May due to the pandemic, the uncertainty with respect to my editing, teaching, and writing careers was starting to cripple me.

To be honest, I am not one for overly enthusiastic self-hope books. For the most part, they seem unrealistic to me, and I find the narratives predictable and self-aggrandizing. But Giulietta's book is different. I liked the fact that it contained her art, and since I was battling the responsibilities in my everyday life to fit in my own painting work, I decided to delve in.

I found Giulietta's anecdotes interesting and relatable; her spirit of conviction shines through this book. I immediately respected and empathized with her; here is a woman out to take control of her life and truly live it. Here is a woman who would not settle for the Groundhog Day life, a woman who traveled Europe alone, learned to sing (and then re-learned to sing once her voice ruptured), created her own community television show, slept in a tent amongst lions in Africa, and starred in her own one-woman stand up show--to rave reviews.

The book is divided into five sections Awaken, Liberate, Improvise, Visualize, and Express with each section having six mini lessons with personal anecdote on the lesson's topic and fun exercises to complete. Giulietta includes a toolkit for each chapter that lists books, movies, and songs that bring home the theme. She believes as I do that successful change is "a series of smaller, internal tweaks that anyone can implement without turning their lives upside down." In this way, Feel More Alive! works like Julia Cameron's immensely popular The Artist's Way series. While reading, I found myself writing furiously in the margins, communicating with the author; I suggest a notebook or journal to record thoughts to help the process.

Here are some of the chapters that rang true for me:

For some of us, routine extends beyond the comfortable and renders us nearly comatose. Giulietta echoes Thoreau in this chapter and emphasizes how "[t]he mass of men lead lives of quiet desperation." Reading this chapter brought me back to my first job out of college; I was working as an engineer at a dull job commuting to work by the Long Island Railroad from Long Island to Manhattan. During the commute, I observed the people around me, nodding off or staring blankly out the window. I, too, remember thinking, "Is this all there is?" Giulietta writes of her first job as "days...spent in a trance" and a life led "in a constant state of inertia, fear, and loathing." This disconcerting state of mind often leads to therapy, as it did for both Giulietta and me. For me, it took a complete breakdown to recognize the artist side of me (documented fictionally in A Portal to Vibrancy), for Giulietta, it took in ad in the paper that set her on her way toward a love of singing.

In order to be happy, we must "slap ourselves awake" and set out to find the things that ignite us. No one else is going to do it for us.

In this chapter, Giulietta writes, "Most of us rarely live up to our potential because we are too afraid to try the thing we secretly want to do." All of us have things we secretly want to do. This was true for my maternal grandparents. My grandfather secretly wanted to be a policeman instead of a butcher and my grandmother secretly wanted to be an actress instead of a housewife. These dreams died because my grandparents did not believe they could balance the dream with responsibility of raising four kids. Also, the paths never presented themselves. My paternal grandmother, however, lived a full life. She loved music and played piano and accordion for the people in her community. She took art lessons and sewed her own clothes. She needed not set her sights to be a concert pianist; she went small, but big enough to satisfy her creative desires. She consistently was happy, astonishing herself and others in small ways.

I have always wanted to be a painter. The characters in my books are painters. I have books on painters. But I kept telling myself I didn't have the space nor the time to paint. And then I found some tools that helped me see things differently. I found a tabletop easel I could place on my kitchen table. I found a palette of acrylic paints that I felt I could work with, bypassing the complexity of oils. I found a book, Finding Your Visual Voice that inspired me to think about media and subject matter and technique. This all happened over a couple of years. I now have a process and with every new painting I learn and, to some extent, astonish myself.

For Giulietta, it took someone to call out her own fear. A woman who listened to her sing at karaoke said that she wasn't showcasing her talent by her song choices; she should aim higher, sing songs sung by greats like Donna Summer and Whitney Houston. Giulietta has a condition called "spasmodic dysphonia," which at one point took away her singing voice, "the core of [her] identity." With perseverance, she learned how to sing again, but stayed with songs that were safe. After meeting the woman who honed in on her fear, however, she took to singing more songs, harder songs, and it turned out that the fears of missing a note never materialized. Instead of being crippled by fear, Giulietta uses it as a spring board. She writes consistently in the book about how she does this, and I admire her for it.

"Research some of the world's most successful people, and you'll find that many of them didn't finish high school or college. They had an idea they couldn't stop thinking about, and they pursued it with enthusiasm until is came to fruition," Giulietta writes in Brilliant Way #22, Self-Educate. I think this chapter is the most important one in the book. We must all be life-long learners to reach our potential; we must be informed citizens, and set out to find our passions, because for many of us, they won't find us. This chapter's personal anecdote is one where Giulietta recounts how she and a friend started a cable show for their community called "What's Really Going On." Neither one of them studied journalism or television production. They attended public meetings, asked questions, researched and retained documents. Ultimately, they portrayed their educated opinion of the goings-on of local government in their show and it became a hit, making them local celebrities.

"Choose to educate yourself about topics that pique your interest. Read books, research findings, interview experts and take informal classes," Giulietta says. So much of our technology supports this, from blogs to movie making software. Start small. There will be a momentum that moves you along.

Posted by Laurette Folk at 9:29 AM