The Miracle of Jennifer Martelli’s My Tarantella 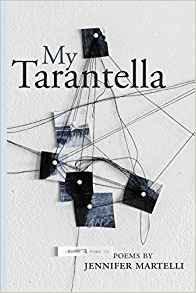 What happens in the world permeates us in very personal ways; events attach themselves to our most intimate lives. The murder of Kitty Genovese affected my friend Jennifer Martelli in this way. In her collection, My Tarantella, Jenn acts as a channel for Kitty. But perhaps I am oversimplifying things a bit by saying that. Jenn’s poems are not at all simple; you can’t say, Oh here is when she… or Oh yes, it makes sense that… This is the stuff of dreams, of ideas, that, like fruit to wine, ferment into myth. This is the stuff of nightmares:

I peek through/the sliced webbing of my gloves, forget to protect/my belly and throat. Golden birds, velvet bats/escape my mouth and no one hears me.

In “Kitty Genovese Names Her Fourteen Wounds,” wounds become mouths (“There’s a mouth below the mouth across my throat”). The 14 wounds that Winston Moseley inflicted upon Kitty Genovese in the vestibule of the Tudor Apartments in Queens (where some 38 witnesses hid in their apartments) speak to a poet who is striving to hear:

I thought of Kitty so hard, I was afraid she would manifest, smiling—/in the dark corner of my laundry room, from my closet hook where belts hang—

This is a book that was meant to be written. This is a book that transcends imagination and plunges into fate. We artists, writers, poets begin our journeys based on the intersection of curiosity and creative prowess; it’s an exploratory process that poses specific questions. When we are on the path of the truth, the world answers back. A psychology-student friend of mine once termed this as “oracular consciousness.” While Jenn was writing My Tarantella, our mutual friend Jennifer Jean found an image of Kitty Genovese stenciled on a building near her home:

Is this Kitty? Is this who you’re writing about? She was/barely formed, barely filled in, except for the contours of her face:/the messy bob, the arched brow, oh that beautiful top lip curved.

The face on the wall was like a ghost saying Yes. The yes is like a breath, relief. Proof. Corroboration. Keep going.

In “A God Lives in the Amygdala,” Jenn expresses precisely what so many of us feel when we hear of such an atrocity, that God is indifferent to what happens here, that “[h]is indifference has settled deep within our ribcaged country.” It’s something that needs to be said, a frustration that needs to be voiced:

Do you know that nothing outside of our mouths will save us?/A god lives in the amygdala, but he is weak, too, asleep under the new/moon./Did you see an angel’s viscera across the sky?

I remember when Jenn was writing these poems, the haunting images that came to her: gold bugs, bats, Queen of Night tulips. I remember her telling me she wanted to plant the black satin-like tulips in her yard. She was living the book when she wrote it, and this is what makes it not just a book. It’s a life too.

If Jenn is a channel, Kitty is a catalyst. In “After JFK’s Assassination, Things Got Really Bad” Jenn writes “Kitty puts things in order, things I thought I’d forgotten.” Kitty serves as an impetus to shake Jenn’s memory. We’re not talking nostalgia, here; nostalgia is too simplified a word and too rosy. A specific hunger for the past is evident and this makes sense. As we get older, the need to remember becomes more pronounced; it is imperative to have proof we have lived. We need to be connected to this life, because it’s the only thing we’re certain of:

During the Bicentennial, when the Tall Ships
sailed into the Harbor, I wore a tube top
with red and white stripes like the flag’s
bloody wounds. I wore sailor pants deep navy blue
with two rows of white buttons tracing the shape
of my uterus. I wasn’t smiling

Ultimately, Kitty’s murder is more than a murder; it’s a metaphor for the disregarded female—an archetype subtly known and sadly, widely accepted, as evidenced by Hillary Clinton’s loss:

Last night, on television, I saw a woman scrubbed/of makeup give a speech. I read about a woman who screamed/but no one came.

I found this book to be a seminal work for the voiced and the voiceless. I feel I cannot do it justice by the meager words I’ve typed here. The evocative images, the divining words—it’s a kind of miracle, a kind of justice for a voiceless voice finally being heard.
Posted by Laurette Folk at 10:58 AM 2 comments: