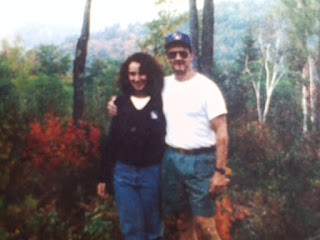 When my son turned three months old I had a most peculiar experience.  He was staring up at the various trinkets in a mobile when I noticed, amidst his darkening eyebrows, my father’s face.  It was comforting yet unnerving to have the face I recognize as love, as safety—and yet a face from the grave –show up in my newborn son.

We lost my dad in 2003, just before his beloved team won the World Series.  With the birth of his three grandchildren, my family knows the true meaning of bittersweet.  My husband’s and brother-in-law's parents are gone as well, so my kids and nephew have one living grandparent—my mother.  She and I often speculate what my father would do with his grandchildren.  “He would sit with Stevie on his knee as he watches football on Sundays” or “He would imitate Marielle’s laugh and tease her incessantly” or “He would have Zachary swinging a bat as soon as he could stand.”  Our minds would create each respective scene and we would sit there with them until we heard the gavel of fate slam down.

My mother had waited a long time to share these grandchildren with my father; my siblings and I all married well into our thirties.  It’s a major milestone for marriages to have grandkids to spoil, scamper about the house; it follows the natural progression of things to experience one’s father evolve into a grandfather.   And it only seems fair.

I don’t begrudge other kids their grandfathers.  In fact, I’ve reasoned that it might somehow make my kids more resilient.  Life takes from you; it’s best to learn this at a young age.  And then I remember who my dad was, his integrity, his wit, his playfulness, and I grapple with how I might portray him to them.  It seems entirely futile.

This situation reminds me of that tearjerker of a song by Mike in the Mechanics called “The Living Years.” The gist of it is this: a man does not see “eye to eye” with his father and when the father dies, things are left unsaid.  There is a verse most apropos: I think I caught his spirit/Later that same year/I'm sure I heard his echo/In my baby's new born tears.  My relationship with my father was, for the most part, in tact when he passed, but that does not discount the impact of the song and its theme, especially now.  And yet, we can wax poetic about the circle of life, but there is something profoundly incongruous about the holes in our matrix of family and how we’re helpless to fill them.

The day after my father passed away, the sun shone gloriously; it was my private Easter.  Ladybugs—a good omen—collected on the panes of my parents’ house, and I reasoned he had reached his spiritual destination.  Coincidentally, I saw a ladybug crawling on my kitchen windowsill the day my son was circumcised.  It was the same type of day known only to the month of October with boundless blue sky amidst nature’s triumph of color.  Because he was six months old, my son was admitted into Danvers MGH and needed anesthesia for the procedure.  I was excessively emotional for obvious reasons and did my best answering the anesthesiologist’s questions regarding my son’s medical history.  When she asked who was home with his twin sister, I blurted out, “My father.”  I meant to say “My husband” or perhaps “Her father.”  I laughed at myself; that was, logically, the wrong answer, but something deeper said, “No it’s not.”

I tell myself, heartedly, to find solace not in fate’s hand, but in what could be.  My mother once reprimanded me when I noted how the twins, only weeks old, would roll back their eyes like Linda Blair in The Exorcist before falling asleep.  “Don’t say that,” she said.  “They’re staring at the angels.”

Posted by Laurette Folk at 7:27 AM No comments: