Meditations in the Ethereal: Poetry and Collage

For me, the ethereal has a spirituality about it, something that transcends the banality of daily life. It has a suddenness to it; it comes unexpectedly, in sudden realizations. It has an ingredient of subtlety; if you're distracted and not in tune, you won't receive its gifts. The ethereal has much to do with lightness, air; ether is at the heart of the word. The ethereal has an elegance, an arabesque, a sort of delicacy, like a lace doily that rests under the frame of a loved one. It can be whimsical. It's definitely elusive.

My daughter seems to have an ethereal quality to her--she is just a wisp of a thing with eyes, eyes that tell the story of emotion and beauty and sensitivity. Eyes that are apprehensive about this world. Eyes with an ineffable hue; eyes not of this world. Her naked body getting into the bath reminds me of Sally Mann's nymph-like children; there's innocence there, but otherworldly qualities as well that portray a sort of ancient knowledge.

Maybe this ancient aspect can be translated into timelessness. Maybe the ethereal, like the divine, exists outside time. And yet, maybe science is honing in on it; it manifests in a higher frequency on the electromagnetic wave spectrum (after all, the ethereal is shaped in light). This science intersects with memory and myth in the mind. These are the ingredients. It's seemingly abstract and incomprehensible when we first witness it, but the mind makes its emotional connections and we learn to define its suddenness for ourselves. This is the interface of story, of myth.

Whatever it is, ethereal is the fine dance of mystery that exists in all of us.

I've tried to match some of my ethereal poems with collage work that has traces of that same quality. I am not sure I was successful in accomplishing my goal, but then again, the ethereal is foremost elusive, and maybe by not capturing it, I've captured it precisely. 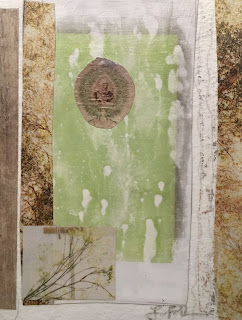 Totem Beasts
There are no ghosts in this house.
No hem of a muslin dress
draped over a riser.
No Emily Dickinson archetype
figured prominently at the banister.
No face in the naked glass.

The boreal firs, always a regiment,
are noble, melancholic as the
tide bathes the sedge.
We listen for what the hayfield says.
We wait
for totem beasts, but no coyote parts these
fallow fields.  No moose.  No
osprey in wake of wind.
Quotidian, these crows, those gulls.

I am filled with pale green air.
My sister's child thumps in Utero.
Clouds snuff the sun, the sacrament, the
fiery heart.
Night comes.

I sit quietly inside myself.
My father bows his head here,
the lines echoing around his eyes.

The Slow Pale Rise of Indigo 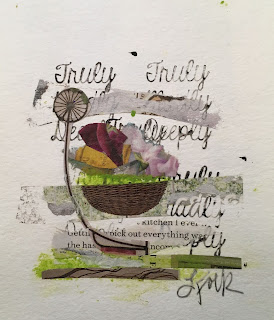 The slow pale rise of indigo taps
at the door of the Underworld—
it wants to walk here, free.

It knows
every twilight is a prophecy
and the visible carries
the invisible on its back.

Our last breath passes through tarnished
skin and
clogs the holes in our bones.
We fret, catch the slack vowels
of the lullabies we sing ourselves.

Something stands between me and the
morning glory's cup of prayer.
Its thin vine grasps at every near thing.
At night, it wrings itself tightly
as if it had hands. 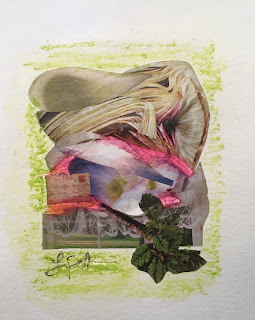 Everything white, as if baked in a kiln.
Moon hazed now, my one hundred year old
eyes closing, a song hidden just under my skin
demands an ear or two.  The seeds
have been sewn.  The sacred chant and
four rosettes are embedded in the
swollen mandala.  I summon the myths
of my ancestors, the mountains supine
and shadowless, the labyrinth on the hill,
the chapel, the Golgotha of cacti crosses.
Huddled in the back pews, the Indigenous 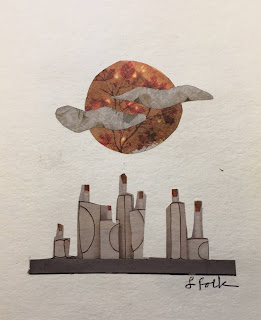 their dark eyes, pious heads.  I walked
the labyrinth to settle my nerves while
their sorrows protruded through the dirt
like small weeds.

My sister's child is a molded angel
white as the dust in that kiln.  There
on the sill, stone wings draped in leaves.
Take root, I say to the rosettes, unfolding.
Lay your pious heads on the translucent pillow,
wrap yourselves in the crimson sheets
and be lulled by song.


Posted by Laurette Folk at 8:35 AM No comments: