As a way of commemorating the ending of the growing season, I decided to paint sunflowers. I thought I would set them up in a still life with bottles and fruit and have a go at it. I picked a color for my under painting and drew my sketch. I thought about my palette of yellows, oranges, greens, burgundy for the wine and the layout of the composition. I thought it would behoove me to take a look at van Gogh's sunflower paintings, because I have always loved his colors and over-all style. My own style, palette, and subject choice seem to be approaching his. I looked deeply into his paintings and experienced an intimacy with van Gogh that I had not had with a visual artist before.

Van Gogh's sunflower series consists of a total of twelve paintings. I've included some of them here. He painted five in Paris in 1887 and seven in Arles from 1888-1889, according to lectures I've listed to and websites. His Arles paintings were painted for Paul Gauguin when he came to visit van Gogh in the yellow house he rented in Arles. Van Gogh wanted to welcome Gauguin with the paintings; he revered the master and was excited about having Gauguin stay with him. Also, he thought it was the start of an art colony, the beginning of a camaraderie between like-minded creative people to combat the loneliness endemic to the craft.

I wonder what Gauguin thought walking into his new bedroom and seeing the paintings of sunflowers. Did he scrutinize them? Delight in them? The two artists traded paintings (van Gogh gave Gauguin two sunflower paintings and Gauguin gave van Gogh a river scene from his time in Martinique) and set to work. During his stay, Gauguin painted van Gogh painting his sunflowers. 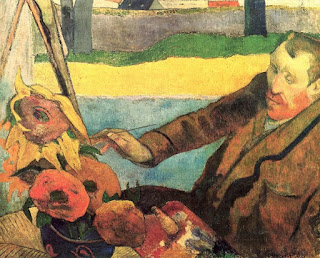 But the friendship went awry when van Gogh had his breakdown, which infamously led to his severed ear. Gauguin, instead of helping van Gogh, packed up his things and split, because Gauguin, as it is known in the art world, was somewhat of an egotistical asshole who did not extend himself for others' sakes.

Sunflowers, to me, are the epitome of summer. They mimic the sun, follow it across the sky during the day. When the sun rises in the East, they face East. When the sun sets in the West, they face West. Some grow to over twelve feet tall; others are dwarf size and grow to two feet. In Brighton, where I lived in my twenties, sunflowers grew in my neighbor's yard and in the fall, they hung their overly seeded heads portraying oppression. I thought I might paint them then, portray that feeling, because I was feeling it too from the depression I was experiencing at the time.

Van Gogh's paintings are famous masterpieces for several reasons, as I will explain below, but first and foremost, they bring out the essence of the subject. Van Gogh expresses the sunflower-ness in yellows, rusts, oranges. He literally draws with the brush, outlining petals and stems with intent. He used impressionism to depict the different hues of green in the leaves by painting pixel-like strokes with a small brush. The more I studied the paintings, the more I understood this in a very visceral sense. The two-tone vase was probably not two-tone at all in real life. This was an invention of van Gogh's to use color for emphasis: he didn't want the vase to disappear in a similarly colored background. 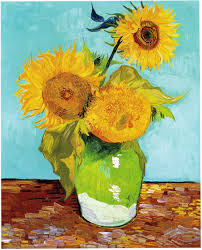 For my first attempt at painting sunflowers, I went to Tendercrop Farm store in Wenham and bought several bunches of sunflowers. In September, the fields around the store have a myriad of varieties of sunflowers in full bloom and it is a personal delight of mine to go there and be among them. So I set up my sunflowers in a vase and photograph them. I put them in a still life with a bowl of peaches and glass bottles. Homage to Vincent, I is my first attempt, and what I realized from completing this painting is that sunflowers have too much energy to be in a still life with other items. This is why van Gogh painted them alone. In my painting, the bottles and fruit have a calming feel and cannot possibly balance the vibrancy of the flowers. You can call it contrast, or you can call it a painting that doesn't exactly work. Also, I painted my flowers when they were very nearly fresh from the ground. Van Gogh painted his when they were drying up, some of them had lost their petals entirely and were just the heads with leaves curling into interesting shapes. In this way, van Gogh captured the flower's essence before it was too late, emphasizing its ephemeral nature. 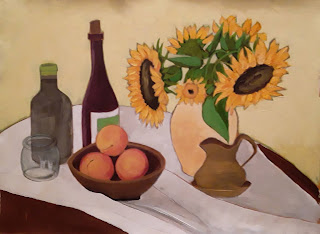 Van Gogh used oils and I used acrylics and I realized first hand the limitations of the paints. It took a lot of trial and error in mixing to get hues I was satisfied with, but in the end, I still wasn't entirely satisfied. The newly available yellow oil paints were also something that made Van Gogh's masterpieces possible. Van Gogh, according to an artist website, was one of the first artists to use them. In the painting I have pictured here, there are only shades of yellow and orange with some green. 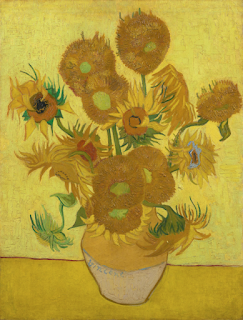 So what makes this painting a masterpiece? I have come up with four reasons.

1. Subject matter. Sunflowers are interesting; they mimic the life force of the sun in shape and color. They are dramatic. In this painting, van Gogh emphasizes their ephemeral nature by painting them in various stages of decay.

2. Filling the canvas, composition. Van Gogh presents various shapes-the circles/ovals of the heads and triangles of the leaves, as well as and strokes- from outlining to dabbing in a sponge-like pattern to what I call pixel-ing. He fills the entire canvas, which is the number one rule for painting.

3. Choosing a palette of harmonious colors. Van Gogh uses a palette of various yellows in this painting from a rust yellow to a lemon yellow. There is no one jarring color that sends the viewer out of the painting.

4. Detail. Van Gogh doesn't gloss over the irregularities of the leaves and the petals. He cares for each one and makes it its own shape. His power of observation is steadfast and acute. Detail is arduous to do, but makes a difference. I have learned to see a galaxy of stars, nebulas, and dark matter in the heads of van Gogh's sunflowers and used this technique in creating my own.

5. Find the essence of the thing and express it in style. By the time van Gogh was painting sunflowers, his style was intact and he knew what he was doing. This is why his paintings are recognizable (reasons 2, 3, 4).

For Homage, II, I realized the sunflowers I bought were not going to inspire reasons 3 and 4 in me, and despite numerous lovely photos, scrapped them entirely. I went online and found a picture of a vase of sunflowers that seemed more interesting via their long petals and paler yellow hue. I painted them, only to realize that the petals from flower to flower were too similar, so I violated reason number 4. This was somewhat frustrating, but deepened my appreciation for van Gogh's work. I will keep trying, though.

Posted by Laurette Folk at 9:19 AM No comments: