A Review of Lost Hearts by Vincent Panella 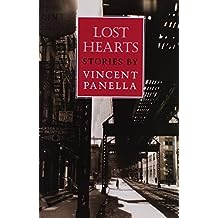 I read with Vincent Panella back in December at IAM Books in the North End of Boston and bought his book, because that's what readers do--buy each other's books--but in all truth, I was not prepared for the powerful punch this book packed.

Lost Hearts is a spectacular short story collection mostly about the life of Charlie Marino, his boyhood, his coming of age, his intimate relationships, marriages, infidelity, Catholic guilt, aging parents. Panella captures the hungers, the idiosyncrasies, the food, the banter, and overall Italian American familial allegiances and dysfunction in this collection. This isn't the Godfather; this is raw truth about the mediocrities of Italian American life in 1950s/60s Brooklyn and beyond and how one of our own makes his way into the world. In this collection we witness deep human truths astutely expressed by a master of his craft. Panella can easily be compared to John Cheever or John Updike with his biting realism.

The first story is titled "Original Sin" and the setting is turn-of-the century Sicily. We start at the very beginning, in the motherland, with a protagonist named Peter who could very well be a relative of Charlie's. Peter lives among Sicily's poor agrarian communities where many have already left for America and "half the houses in [his] little town [are] empty, windows blackened, doors padlocked, and keys given to relatives." There is an agrarian movement culminating; the itinerant workers or "the landless ones" are uniting and revolting against the rich landowners. Peter's father is a man hired to contain the uprisings, and in doing so, kills one of the leaders. This puts Peter's father on the fast track to America. The Oedipal theme of the story is palpable; Peter hunts down his father's mistress, Murena, (despite his being happily engaged) to "see" her, but "seeing" ultimately leads to the two becoming intimate. Panella captures their intimacy exquisitely: "She was a shadow lying across him, a witch perhaps, someone with appetites he'd only imagined. He observed her as though from a distance, as though his body belonged to another person. And that other person was his father, muscle, bone, and fluid."

Clearly Peter is used by Murena to gain power over the father, while Murena is a portal to a new life for Peter, a life that would have been his father's: "This life with its daily toil, with its hand tools, buckets, donkeys, and mules, its religious rites and careful marriages, all this had been called into question by one afternoon with the woman who'd made love to both him and his father. He was no longer a boy, or even the young man who would marry Concetta and follow these twisted roads."

The Oedipal theme is a psychological archetype that fits into the grand scheme of things--why some people left the old country and why some stayed.

In "Introduction to Calculus," Charlie is persuaded by his boss Scalzetti to pose as a photographer for a modeling agency and photograph Scalzetti and his mistress Anne having sex. Anne has a reputation for her sexual prowess; the men in the neighborhood regard her as "insatiable" with "something haunting and burning" that the men want. Scalzetti thinks he's duping Anne by bringing in Charlie and he wants the young buck, who at this point is still in high school, to have a go with her. Like "Original Sin" this too is an initiation story, one wrought with disillusionment: Charlie doesn't see an insatiable sex goddess through the viewfinder of the camera; he sees a women with a scar below her abdomen, her wedding picture, and photos of her "angelic" twin boys, and he can't un-see them. Panella carefully constructs the tableau, gives us all the un-sexy details of the photo shoot, the imperfect bodies, the complaints, the clumsiness, the humor, the life underneath the porno which some can ignore and others can't.

We enter into relationships not only for the physical and emotional pleasure, for the comfort; we enter into relationships to learn another's philosophy of the world, to experience a lover's body like a landscape, take on his/her history, and day-to-day life, and we assimilate into our own lives the things that we think we should. It's a discovery on multiple levels and, given our own emotional/psychological makeup and needs, the reason why we choose some lovers over others. Through every relationship, whether romantic or otherwise, we get the feeling that Charlie is absorbing the experience as life's witness, and learning. Or maybe it's Panella who is learning, but either way, we as readers reap the benefits as well.

In "A Symbiotic Relationship," Charlie runs into his ex Beth at a job interview at a college and the two rehash the reasons for their breakup. At the hotel where they are both staying, Beth tries to seduce Charlie, manipulate him, and they rehash some more while Charlie fields calls from his wife. What we are witnessing is closure; in the rehashing we learn that Beth predicted Charlie would cheat on her, and was eternally guarded and mysterious; Charlie wanted Beth to tell him that she loved him, but he ultimately proved Beth right and cheated on her with his future wife. When he did, Beth didn't grieve; she instead retaliated with anger, plunged a key into his forehead.

What Charlie decides that evening is that he doesn't want sex from Beth, but he wants "something." When she weeps in his arms that night in the hotel; Charlie feels complete. Beth ultimately shows him what he wants to see, that she is a vulnerable human after all: "She came to me and opened her blouse and cradled my head to her naked breasts the way she used to do, holding me there while the bleak and lonely rush of cars and the drone of idling diesel engines washed into the room with the meager light. Some tears rolled onto my face from above and I wiped them from her eyes."

We learn that what they had in their relationship was not necessarily love; Beth was older and matriarchal; Charlie had a young spark that drew Beth to him. It was more need, a symbiosis, and although this term has a negative connotation, it's a very human thing and more common then we dare to admit.

In "Like Father," Charlie visits his father in a nursing home, and the old man has every ailment in the book--diabetes, Parkinson's, dementia. Charlie's father Hank has begrudgingly given up his money to his son for him to pay the nursing home bill; he's begrudgingly given up everything, but the fight is still there in the way Hank flirts with the nurses and questions Charlie incessantly about the money. "Like Father" is short, but potent; here is a story of a once powerful man who was integral to the neighborhood, whose presence created unbearable tension in the household, who exercised his virility to the extent he could, and who is now reduced to being a toddler. But the touching aspect of this is how Charlie relates to Hank, how he compassionately cares for him, even though Hank was a son-of-a-bitch of a father. And Charlie can't help but see it, the physical evidence of their connection, how they are linked: "But for several years now he felt himself moving into his father's form. Or maybe it was the other way around, that his father now occupied him, and as death released the father's soul it rooted in the son." It's a bittersweet story, sure enough, but it's so satisfying that someone got it right.

Panella gets a lot of things right with this collection. I hope he gets the recognition he deserves.