Eve, Reimagined: A Review of Megan Merchant’s In the Rooms of a Tiny House 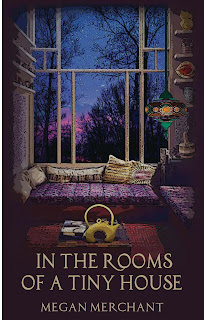 Megan Merchant’s new chapbook In the Rooms of a Tiny House by ELJ Publications has language so rich and vibrant, it will leave you awestruck. Merchant expertly reimagines the Adam and Eve myth in this collection; in lieu of Eden, we have a tiny house, a dollhouse perhaps, a metaphorical fish bowl where we can observe Eve loom large as loving partner, shameless adulteress, and eager mother-to-be.

In the first and eponymous poem, we peer in and see objects: an oblong afghan, a holy book of poems, an uneaten apple, and “a drawing of the eight-armed sea/chewing fingernails off the dead.” Eve is a woman in love, an intuitive woman who is certain love will be fruitful: “she feels good news licking/the soft linen in her veins.” In “Every Day Is Spring,” and “Burning Barrels,” Eve is learning to be and do, a newlywed in every sense of the word, trying to find her place in the house, explore who she is as woman—an unfettered sorceress who “boils a tin of apple-white and ambrosia, soaks the seeds,/ paints constellations on the bedroom wall in alphabetical order.” And yet, she is childlike, a new being with a curiosity for the world around her, “dreaming of fireflies trapped…the wavelength of pale light/ glowing from their soft bodies.”

In “Pitted” and “Making Room,” she is morphing, expanding; “Her ribs are cracking wide against/ the walls of the tiny house.” The pregnant Eve no longer fits the tiny house, so she leaves, “takes a man with hairy legs and oaky/ breath home from the bar” in the poem “Open All Night.” Eve isn’t aware of what not to do; she is naïve and fallible, as her legend dictates, but unlike the dire repercussions in the original myth, this doesn’t matter, because “Adam forgives her.”

The serpent appears in “Nesting” as the rope in a tire swing, but Eve pays it no mind and “snaps her fingers/ to a song/ she learned/ from the men/ who camp across/ the river.” Her motherly instincts take effect in “Passing Down Knowledge” as she surmises what she will teach her child (“[h]ow to hold the moon in a bucket of water/ [h]ow to speak to strangers in questions only/”); she plans what to do after the birth, how she will make the child clean and “wash as much sin from its skin—the curdled filth/ that smells like her.” At this point, we see that Eve is not so naïve; she has learned somewhere along the way that she is bad. Merchant expertly portrays here the primordial and fallible Eve that lives in every woman’s psyche.

Hope and promise is greatest when the child is born in “The Promise of a New Day”; Eve knows that this day will “be the only perfect one.” It is the demise of her ripened body (“Purple-streaked skin droops over her belly,/ a plum wilting) that sets the tone of disillusionment; life will be tainted from here on out for her, her child, and Adam. But she faces it like a seasoned woman, the intuitive sorceress who knows what she must do, what she will do to reclaim herself: paint “her body with clay” and “stand under the ripe moon.”

By reinventing myth, we can better understand it, make it our own. I believe Megan Merchant wholly succeeds in doing this with her new chapbook.

Posted by Laurette Folk at 7:54 PM 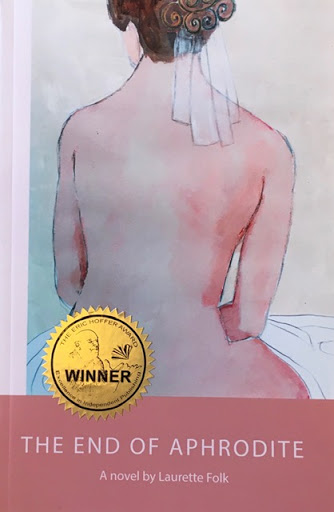 The End of Aphrodite won the Eric Hoffer Award for General Fiction.