Battlegrounds and the Need for a Cleared Space

Battlegrounds and the Need for a Cleared Space
The Compassion Anthology: Letter from the Editor

In my twenties I lived in a house with two male roommates: one was a good-natured, unemployed packrat who gleaned (to use Sandra Winter's term in her essay "The Gleaners") from our neighbors' trash, and the other was an ex-con yogi who painted mandalas and hung them on his bedroom wall. The packrat roommate was constantly home creating a mess wherever he went in the house. There were always dirty dishes in the sink, towels on the floor, overflowing trash, CDs, magazines, clothes everywhere, and of course, his gleanings. Nothing had a place. I took the room in the house because I couldn't find an apartment that would take my dog. Also, I was broke. The only way I could live in that chaotic household was to constantly clear a space for myself to exist.

I had my own room and spent most of my time there where it was clean and warm and cozy and where my dog and I watched the Romance Channel. In the kitchen, I cleared a space for a bowl of cereal and a cup of coffee every morning. I cleared a small space in the sink to wash my dishes. In the den, I cleared a space on the floor for my yoga mat to center myself after a stressful day of teaching. I managed to exist in this chaos, and I still hold this philosophy, especially when things are in disarray, mentally and/or physically. I think clearing a space is an essential skill for survival, but not only this. When you clear a space and push the minutiae back, you choose a different consciousness,  a sort of simplification. You choose, in a word, peace.

This past winter break I spent every spare moment delving into ancient texts like the Iliad and the Odyssey to create curriculum for the World Literature I class I was assigned. I had forgotten that Homer spares us not the gory details of how larger-than-life soldiers slaughtered one another in the Iliad. The brutality is a bit exhausting to read (in the Iliad, it's the men who are slain; in the Odyssey there's an animal sacrifice on nearly every page) and yet in the midst of Homer's account of the Trojan War occurs a most tender and compassionate scene where King Priam of Troy visits the great hero Achilles to ask for the body of his son, Hector. Achilles not only slays Hector out of revenge for the blood of his comrade Patroclus, he ties Hector to his chariot and drags his body around the camp for days.

Now, Priam is an easy target for the revered warrior Achilles, a lamb gone to slaughter, if you will, but instead of killing Priam on the spot, Achilles does something utterly amazing: he weeps with him. When Achilles beholds Priam, he has "a deep desire to grieve for his own father" and the two "[give] way to grief." Achilles then commands the women slaves to have Hector's body bathed and anointed with olive oil; he himself wraps it in a battle-cape, loads it unto Priam's wagon, and promises Priam a cease fire until Hector's funeral rites are over.

I have been exceptionally aware as of late, how my own battles persist: the battle for good health despite my aging body and its minor yet annoying ailments; the battle with disorder, uncleanliness, and chaos inherent to raising two toddlers; the obstinate battle between creativity and livelihood; the prominent battle between creativity and motherhood. Being a soldier of 101 battles wears me out, and I know when I've reached the point when I need to clear a space for myself; I know when I need to construct a demilitarized zone.

The DMZ that exists between North and South Korea is a favored trope, referenced often by poets and writers. It is, quite literally, "an accidental paradise" to quote CNN, where rare and endangered species live relatively peaceful lives. It is an anomaly, a paradox, just like the space cleared for compassion in Achilles' lodgings.

This clearing of space, this DMZ inside Achilles' lodgings, would never have been possible if not for the god Hermes who put Achilles' soldiers to sleep before they could overtake Priam's wagon. The presence of the god is a metaphor for aligning with our higher natures to claim compassion paramount for ourselves and others. In our rushed and stressed world, to clear a space really seems like a monumental task--a task for a god. But it's possible. This focus on our higher nature is the subject behind Lily Prince's painting "The Better Angels of Our Nature" (pictured above right). This vibrant, ethereal, yet earthy piece has the goddess of liberty figuring prominently in the high ground, an indication that our alignment with such natures is the true meaning of freedom.

For our winter 2016 issue of the anthology, we are especially privileged to have poems from the manuscript Songs in the Storm by the late Admiral Mahic, a Bosnian poet who cleared a space for poetry in the midst of a war. I've been working closely with Mahic's translator and friend, the Canadian writer Brian Fawcett, who resurrected the manuscript from the archives at the University of Northern British Columbia. Mahic's poetry strikes me with a sense of awe for the human spirit and its dichotomies; it reminds me of the Joseph Campbell philosophy of the transcendent energy of God and how, when it hits the time space continuum, breaks into opposites: yin and yang, good and evil, male and female, war and compassion.

Please clear a space in your own lives to process the work here by our artists, poets, and writers and consider joining us for our annual exhibit in May at North Shore Community College titled Women Artists and Writers: Compassion, Creativity, and Courage to benefit Amirah (see Submission Guidelines).

Yours in creativity and compassion, 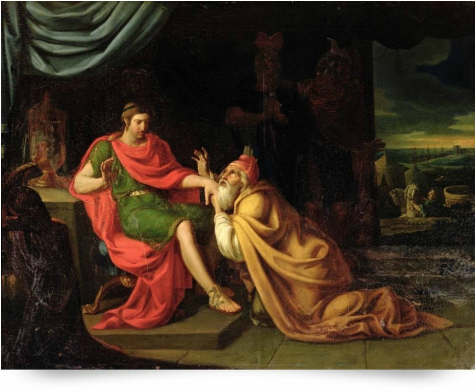 Priam and Achilles by Alessando Padovanino (above), The Better Angels of Our Nature by Lily Prince (below) 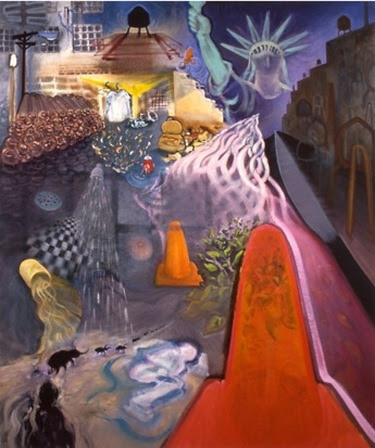 Posted by Laurette Folk at 3:49 PM