Every morning, the kitchen sink, filled with soaking pots, sippy cups, dishes, silverware.  Every morning, the locust trees, on guard in the backyard; the neighbor’s dog lunging at the screen as we walk by.  Every morning a plastic Dunkin Donuts cup (with straw) tossed in the overgrowth.  The camp kids gathering under the boxelder, kicking soccer balls and playing tag.  Every morning, crows, quotidian and legion, strutting in the grass, perching on the backstop.  Summer makes the minutiae of suburbia ever more prominent and yet, in the midst of all mundane, there is an undercurrent of mindfulness and also, discovery.  My twin toddlers discovered flowers and ants and rocks.  Black-eyed Susans were Stevie's favorite, while Marielle preferred small white clovers, insignificant to anyone or anything else except bees.  Once, she carried around a small dried blade of grass for hours.

(Go out and make your own discoveries importunes Dr. Scott, the paleontologist, on Dinosaur Train).

This summer I discovered the blackberry bushes in the woods by Ayer School, sweet, dark gems that reminded me of Jefferson, NJ, and specifically, Lake Morskioko.  I spent part of my childhood there at the lake, where the blackberries grew on the side of a steep, narrow dirt road to the entrance, and pickerel fish wavered in sunlight near high grasses; where daring girls aligned themselves perfectly on the high dive and fell blindly backward, and wet feet slapped at concrete.  I had learned to swim there, and dive, push myself into the chilly morning water and feel the immediate and imposed vigor of being awake.

My kids continued their discovery of words; they repeated them like parrots, sang them, adorably mispronounced and misused them.  Mary was more confident; she said them like she knew what she was talking about but didn't mind being corrected.  She parroted Mommy (still does) to test the words on her lips, see how they sound, memorize them for later.  Stevie pronounced quasi-sentences tentatively (still does), looking at me to see if he's got it right and he was so endearing, I ached.

I have discovered my aging body.  Sprouts of gray here and there, age spots, aches.  My most precious finding in July was a small wooden bench someone tossed in the woods behind Ayer school.  I had been thinking about this bench nearly a month before I found it.  The rocks at the park are too low to the ground and hard; I have long needed a sitting place of ample height to rest and even meditate while Josie takes a break from her morning fetching.  This sitting place needed to be natural (I thought of a log, but where would I get it and how would I get it there?) something subtle, under the radar of potential thieves.  One day I saw the little bench stuffed into a bramble bush behind the school.  I trekked out of the woods with the it resting against my hip and brought it to the place under the boxwood tree where I had (and continue to have, as long as the weather keeps) a few moments of meditation in the morning. 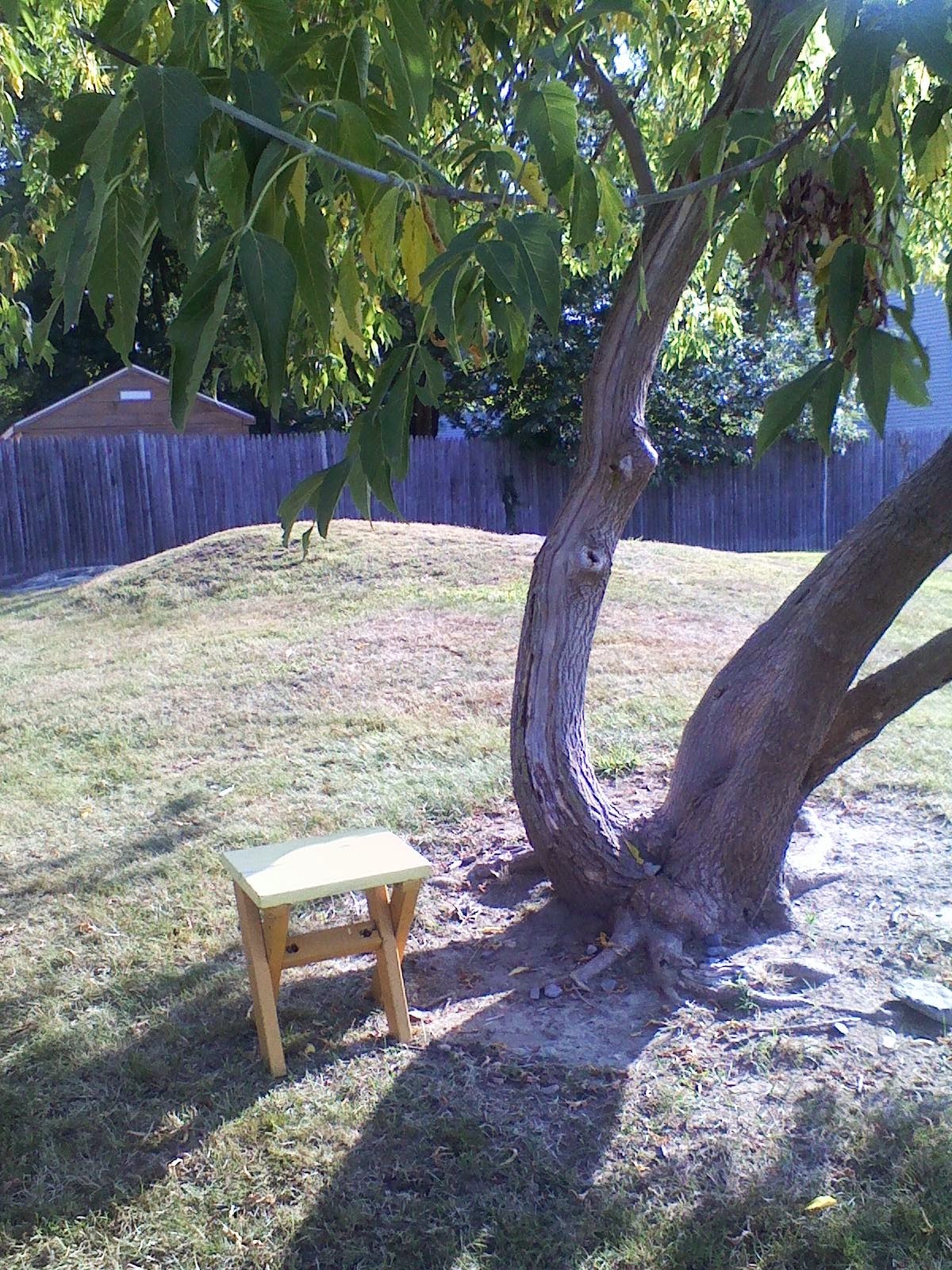 Josie has aged as well with her ever-whitening snoot, the slight lift to her paws when she lies down, as if she's getting her nails done.  Evidence of arthritis.

At twilight one evening in early August, I heard a screech owl.  I was sitting at the kitchen table after clearing the dinner dishes, checking the weather on the ipad, when I heard a trill.  It's a bird, I thought.  A frog?  I rushed outside and heard it again coming from the darkening woods.  It was pleasant, serendipitous, like an unexpected kiss on the cheek, but more than this: it was totemic.  My husband heard it too.  Owl, he said.  My neighbors apparently heard nothing, because they continued to talk loudly and eventually scared the critter away.  I returned to the ipad and researched owl calls.  I found him; the diminutive screech owl whose call was nothing like a screech at all, but a soft, whistle, a sonorous purr.  So here was a thing vastly different from its name, evidence that something must be experienced to know what it truly is.

Sometime in mid August, I got it in my head to do collages; this is what some call "found" art.  The etiolation of summer flowers, the heat of the summer daze, had me searching for a portal to vibrancy.  I fetched a copy of Architectural Digest (a magazine that appeared one day in the mail, sans subscription) cut out an image of a non-descript white house and placed it atop a mountain range with Laura Bush's flowers in the foreground (her summer ranch home was featured).  The background was a gilded glow, a southwestern evening.  In this collage, I had found a fictitious place and solved a mystery: I imagined my deceased father living there, atop the Southern Sierras.  He always loved the west. 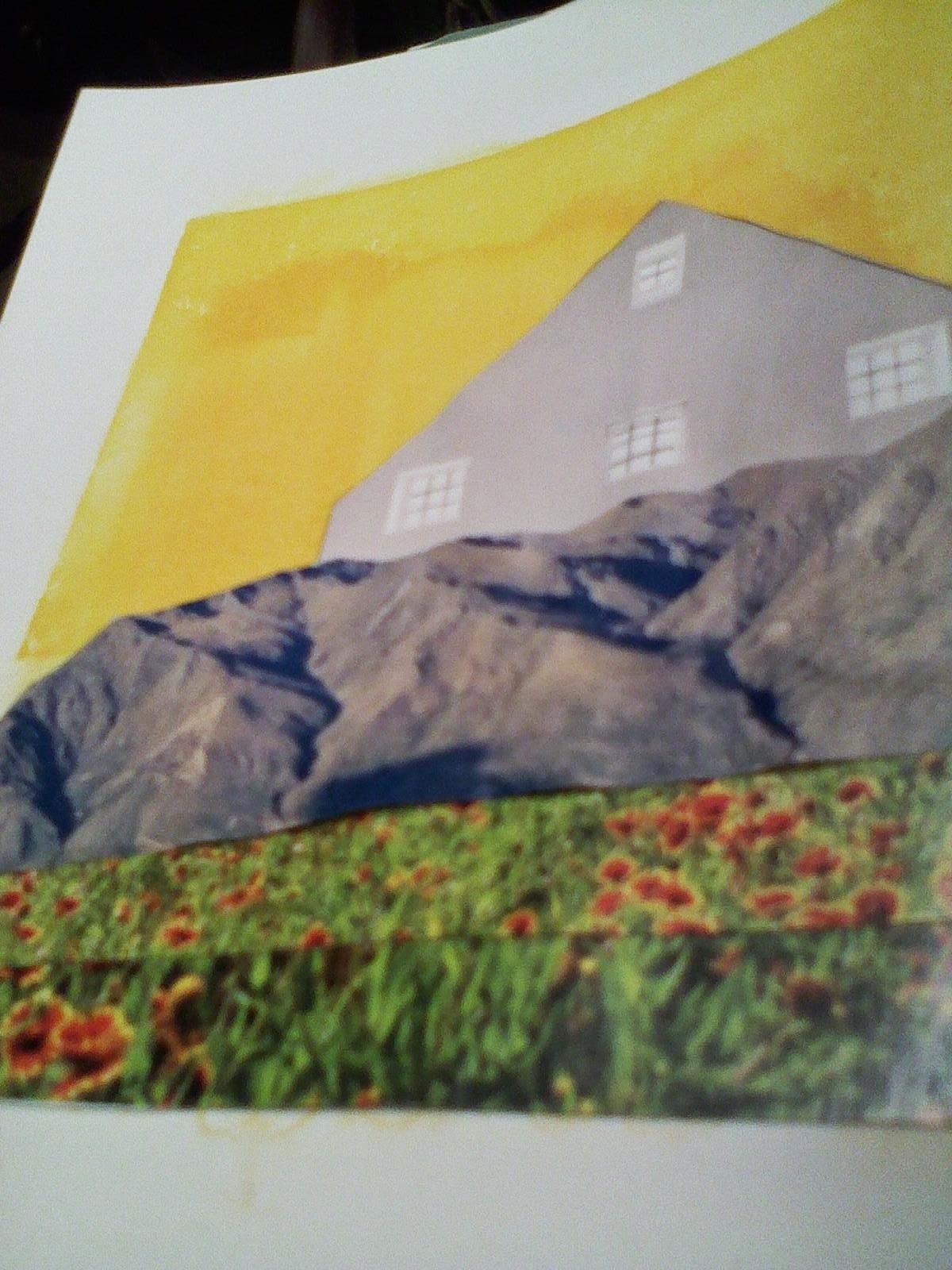 Now, the semester has begun and the kids have started going to daycare twice a week.  Our lives are filling with things to do and the mundane has been eclipsed by urgency.  It feels good to be in the groove again, to have a role outside of my house.  But I will miss this summer’s slow undercurrent of mindfulness made apparent and remember the gifts it brought.

Posted by Laurette Folk at 7:21 PM